Cementing itself as one of the best British offerings of the year thanks to a tour de force solo turn from Tom Hardy – whose titular labourer feels like he’s been hewn straight from a block of his own beloved concrete – Steven Knight’s Locke (2013) harks back to the bygone era of the one-person show. With only one discernible location – the interior of an expensive yet tellingly practical SUV gliding towards a date with destiny – Knight’s follow-up to last year’s Jason Statham revenger Hummingbird (2013) is more drive ’em up than beat ’em up. It’s also utterly enraptured in the subtle drama of one perfectly ordinary man whose life begins to crumble around him after a past trespass comes back to haunt him. 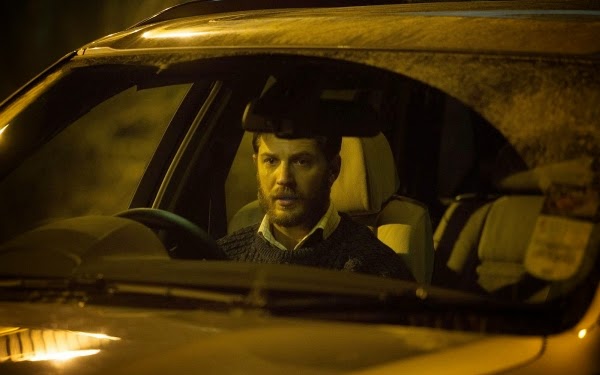 Hardy plays luxuriously-accented Welshman Ivan Locke, a skilled and resolutely dependable cement mixer who’s first witnessed locking up the same site which the next morning will play host to one of the largest cement pours in history. With his wife (voiced by Ruth Wilson) and two sons waiting patiently for Ivan to return home in time to watch the big match, Locke seemingly has it all. However, our man from the Valleys isn’t homeward-bound, but is instead heading towards Kent in order to rectify as best he can a catastrophic lapse of judgement from his past. With his career on the line, his wife inconsolable and the impending cement pour on the brink of collapse, Locke embarks on a juggling act of quietly monumental proportions, bravely attempting to restore solidity to his imploding universe one call at a time.

Hardy’s entirely deserved, rapid ascent to international stardom – poorly-received Star Trek sequels and insipid McGee spy dramas aside – has been nothing short of remarkable. Upon watching Locke, it becomes extremely difficult indeed to picture any other character actor of his ilk in the driving seat, such is the control that Hardy exerts upon what could have been a bland, monologue-heavy role. Great praise should also be extended to Knight, whose previous as a renowned screenwriter for the likes of Stephen Frears (Dirty Pretty Things) and David Cronenberg (Eastern Promises) clearly held him in good stead when he hit upon the idea to direct an 89-minute feature shot almost exclusively on the dusky M6. Fortunately, Knight’s steadfast devotion to his film’s core conceit pays dramatic dividends from first minute to last.

With more than a little of the late, great Richard Burton about him, Hardy’s Welsh lilt does at times veer towards the hard shoulder, but this is one of several minor flaws easily forgiven when you take into consideration what he and Knight have quite miraculously achieved. Following on from his back-breaking performance as burly Batman antagonist Bane, the British star transforms himself into a snot-ridden, even snivelling shell of a once-sturdy man, brought to the edges of despair by one moment of emotional frailty (a fact that visibly disgusts him). As such, Locke never shies away from from thrusting 21st concepts of masculinity into the full glare of the high beams, exposing its morally complex protagonist at his most vulnerable before triumphantly rebuilding him from the foundations upwards. Don’t miss it.