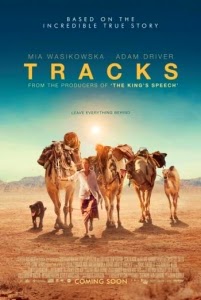 Robyn Davidson’s nine-month solo trek across the outback is a true-life legend in her native Australia, so its surprising that it only now finds a first cinematic transfer in Tracks (2013), a handsome adaptation by John Curran starring a terrific Mia Wasikowska. Davidson – then 27 years old – walked the half the island’s length from Alice Springs across 1,700 miles of desert to the Indian Ocean, accompanied solely by three wild camels and her dog, Diggity. As much an attempt at personal emancipation as physical endurance, it was captured by National Geographic photographer Rick Smolan, whose parched photos of her trek made Davidson a cover star and story a sensation.

Davidson, head bowed next to her camel as if communicating with it silently, was said to be the most popular National Geographic cover for a decade. Along the way her journey invites originals, who dub her the ‘camel lady’, hordes of beastly tourists who want a capture a glimpse of her journey, and of course the 45-degree heat and harshness of the Australian outback. This is the locale so terrifyingly realised in Ted Kotcheff’s recently rereleased Wake in Fright, but Curran treats his adopted desert homeland (the director hails from New York) as a place of spiritual wonder. 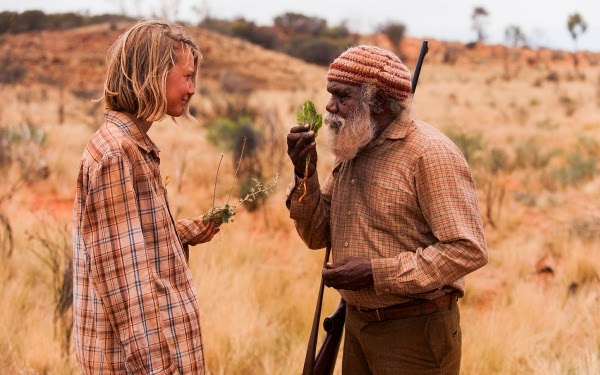 Curran and his cinematographer Mandy Walker make the film beautiful to look at as Davidson parades her camels through dunes and onto a fabled ocean you wonder will ever come. Comparisons with Nicolas Roeg’s 1971 classic Walkabout are nigh on unavoidable, not just as a portrait of a young woman in the outback, but in its perception of rolling desert as a place of mystical adventure, and its portrayal of aboriginals as inextricably linked to the skin and bones of Australian civilisation. At one stage Davidson is chaperoned through a sacred part of the outback by giddy tribal elder Eddy, delivered in a fine performance by Rolley Mintuma, and it’s these short encounters that add a little more motion and effect, even if it means Tracks does at times feel more like a conventional mainstream road movie.

As a portrait of personal adventure, the better comparison is actually Sean Penn’s Into the Wild (2007), but while Christopher McCandless’ journey is steeped in counter-cultural significance, it’s never entirely clear why Wasikowska goes on this trip – and that’s a good thing. Curran’s biggest error is to steep her motives in her personal history, relying on flashbacks to her mother’s suicide and, most curiously, to her dog’s death as if to give her trip some sentimental import. Sure, Davidson’s trip surely came about from a rebellion against a patriarchal society, a flash of feminist integrity amongst the macho world of the Australian outback, but flashbacks to her childhood make her expedition seem far more solipsititc than it ever actually was.

It’s in Wasikowska’s confident performance alone that it’s more gratifying to acknowledge any motives. The Australian actress appears to come of age in by far her most assured role, every bit believable as a tough but introverted city girl making her way in her country’s outback. There may have been times when it looked like Alice’s Adventures in the Outback, but Wasikowska herself gives a performance of stature in Davidson’s battered shoes. Her occasional photographer and on-off lover Rick Smolan is played ably by Adam Driver (rumoured to appear as a villain in next year’s Star Wars: Episode VII) – and it’s with his photos that Tracks closes, a charming link between this physical feat and a cameraman’s artistic endeavour.