There’s more than a hint of hagiography in Joshua Michael Stern’s tick-box biopic of Apple co-founder Steve Jobs, out now in the UK on both DVD and VOD. On paper at least, the late Jobs represents ripe material. He was a megalomaniac figure who would revolutionise the technology industry. He was a man whose life was full of betrayal (both committed by and to him), who grew up in the hubbub of the sun-soaked hills of Silicon Valley at the birth of the home computer revolution. He took on the music industry with the iPod and made tablet computers a reality that all would want to own. Surely this would be essential viewing in the right hands? Sadly, Jobs’ rise is firmly in the wrong hands. 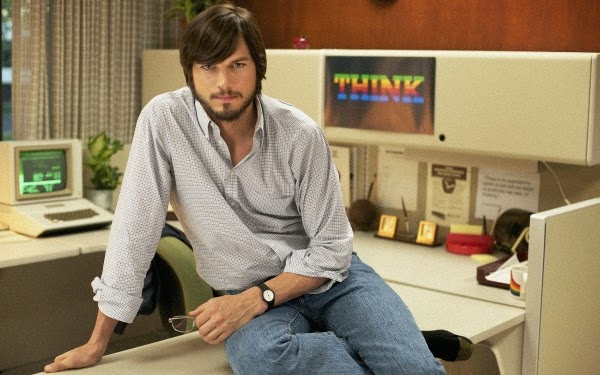 We begin in 2001 at the launch of the iPod, with Ashton Kutcher (a known tech-lover and investor) taking the stage kitted out in the black turtleneck and blue jeans combo synonymous with the man. From the expressive hand gestures to the verbal ticks, Kutcher offers an impressive impersonation of Jobs, even if he never completely gets under the skin of this complex character. We’re then treated to a techno-sermon where we see Jobs at the top of his game. This opening fades as we’re thrust back to the seventies, were a college drop-out swaggers around the campus of Reed University to the beat of Cat Steven’s Peace Train. From here on out the story trundles along making sure to include every scrap and titbit that’s known about Jobs, as if written by an excitable Genius Bar staffer.

Jobs unites with Steve Wozniak (Josh Gad) and together they design the first Apple computer. Wozniak is portrayed like a doting puppy with a gift for computer coding, caught in the ever-looming shadow of Jobs’ ego. Together they assemble of team of like-minded “crazy ones” who use Jobs’ parent’s garage as a base to form Apple. The company grows exponentially as Stern ticks off key relationships, including early investor and former Intel exec Mike Markkula (Dermot Mulroney) and “the Pepsi guy” John Sculley (Matthew Modine), whom Jobs hired to improve Apple’s marketing and become CEO. The rise, fall and resurrection is told with great haste and a sense that the film’s director is more concerned with pleasing Apple fanboys than constructing a compelling account of Jobs’ pioneering life.

The essential problem with Jobs isn’t just its endless montages; it’s the fact that Michael Stern seems to be too in love with the subject matter. Rather than cherry-pick key moments and give the essence of the tale, it attempts to cram in the whole kit and caboodle. The question that constantly looms, however, is who exactly is this movie for? Is it for Apple devouts? Arguably not, as most already know the history of the brand material all too well. Those who aren’t as aware of Job’s life likewise will wonder what all the fuss is about when told in such a dull-witted light. It’s a case of an opportunity missed; the plotting is sloppy, the characterisation lousy and the overall approach far too sanctimonious. Fortunately, Aaron Sorkin’s long-mooted adaptation of Walter Isaacson’s Jobs biography could yet make amends.