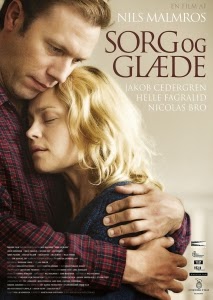 Film director Johannes (Jakob Cedergren) returns home from a trip to be told that his wife Signe (Helle Fagralid) has killed their infant daughter in director Nils Malmros’ largely autobiographical effort Sorrow and Joy (2013). Initially filled with disbelief, Johannes quickly rallies himself into supporting his wife’s case for psychiatric care, rather than psychiatric imprisonment. This almost categorical lack of spite in the film’s central protagonist, despite the circumstances of an unthinkable act, is intriguing, if not outright baffling, and only when Malmros eventually reveals his central couple’s back story does Johannes steady, practical reaction begin to make sense.

Based on the same tragic incident in his own life, Malmros has stated he set out to make a film in which love conquers all, and, encouraged by his wife Marianne, felt only his own experiences could convey the message fully, so we have Johannes as Malmros, seen making films similar to his own filmography, and a relationship based on the same conflict that existed between he and Marianne. Structured as a conversation between Johannes and Signe’s psychiatrist, Dr. Birkemose, Malmros cuts between their discussion of Signe’s anxiety, and flashbacks to events leading up to the tragic incident. The director does much to establish that Johannes’ superiority over Signe was a source of great unease between the two – he teased her about her choice of home décor etc – and she reacted in tearful frustration.

Johannes’ insensitivity towards Signe’s obviously vulnerable mental state is set up as causing an imbalance in the relationship and an atmosphere of dependence – though he criticises her, she relies on his empty comfort for reassurance. Johannes emerges as a deeply unlikable character; he destroys his wife’s medication, he exacerbates her anxiety by ignoring it, he fails to compromise his career for her mental health. Sorrow and Joy’s structure – carefully crossing from his past antagonism of Signe to his present attempts to take responsibility – is what holds the attention, if only to work out how Johannes could behave so coldly. By laying out the intricacies of events leading up to the infanticide, we are granted a perspective akin to that of the doctors and judge, to consider the evidence and challenge preconceptions of blame and culpability.

On the one hand, Malmros seems to be bravely admitting his own guilt by portraying Johannes so harshly Yet on the other, there’s something unsettling in the way he seems to be seeking absolution too and unfortunately, Cedergren’s performance as Johannes is so devoid of empathy that it becomes increasingly hard to engage with the outcome either way. Though an admirably tough subject to tackle, by sticking so closely to autobiography from his own perspective rather than his wife’s – including an unnecessary digression involving another director’s Jesus biography – with Sorrow and Joy Malmros has perhaps missed the chance to convey more subtly the deep understanding and respect that undoubtedly exists between him and his wife.