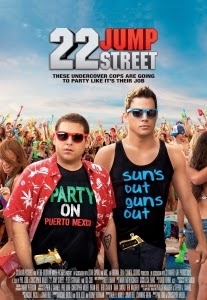 When Jonah Hill and Channing Tatum tumbled onto screens in 2012’s 21 Jump Street, a movie reboot of the TV show that launched Johnny Depp’s career twenty-five years earlier, expectations had understandably been tempered. The leads were likable enough, but the concept seemed weak and the direction was squarely in the untested hands of Phil Lord and Chris Miller, at that time only known for the wonderfully bonkers Cloudy with a Chance of Meatballs (2009). Luckily, the result was smart, warm, and very funny; the double-act of double-acts had nailed it. Could they pull it off again, though, in the brilliantly-monikered sequel 22 Jump Street (2014)? Of course they could. 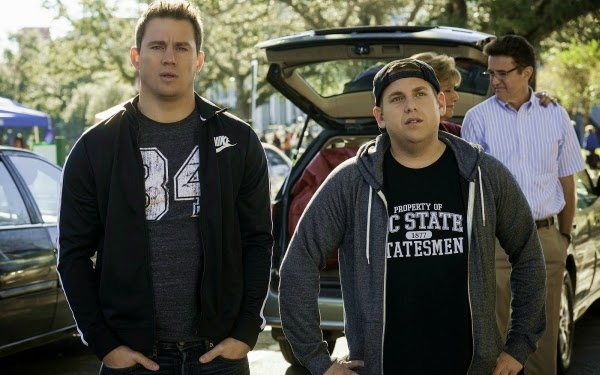 From their meteorologically inclined appetiser through to the universally adored The Lego Movie (2014) just a few months ago, Lord and Miller have excelled at up-ending convention and riffing on genre traits and clichés. Far from being an exception, 22 Jump Street provides more of the same, leaping head first into the very fact that it is the sequel to an unexpected hit – and its invariable inferiority to the same. This time, rather than staking out a high school, undercover cops Schmidt (Hill) and Jenko (Tatum) are off to college. Called back into the same operation as the first film – now located across the street – the duo are sent to MC State to uncover the supplier of a new drug called ‘WhyPhy’. After the success of the original, a follow-up was inevitable and the writers and directors milk that for every ounce.

Opening with a television show’s customary “Previously on…” recap, Deputy Chief Hardy (Nick Offerman) then sends them off with a wink to do exactly the same as they did before, but they’ll have more money thrown at them this time. The audience is also warned that it’s always worse the second time. Fortunately, that’s very far from the case with Hill and Tatum on wonderful form again with their charming odd- couple relationship putting the ‘romance’ in bromance. They’re both equally at home as comic actors eve with wince-inducing slapstick – most notably put to the test during an opening bust that recalls Beverley Hills Cop (1984). Knowing the genre like the back of their hands the directors balance childish humour with whip- smart asides and a tirade of visual gags, managing to keep all forms of comedy funny throughout.

To their immense credit, Lord and Miller even treat their supporting characters – played by the likes of Ice Cube and a Mexican Peter Stormare – to their share of chuckles. Arguably they save the best for last with an inspired credit sequence that promos the next dozen or so potential (ridiculous) sequels; it’s all very meta, or course. Whether or not a third instalment ever arrives on screens, 22 Jump Street is hugely successful in retaining – and in many instances, improving upon – the qualities of it predecessor and pitching some jokes that will still have people chuckling for days afterwards.