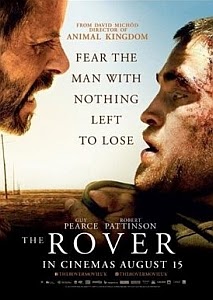 Australian director David Michôd turned heads back in 2010 with his superb debut feature Animal Kingdom, an intense, intertwining drama set within a Melbourne crime family. An ambitious and sophisticated work for such a relatively inexperienced filmmaker, Michôd clearly felt a palate cleanser was what was called for from his follow-up, The Rover (2014). A post-apocalyptic road movie that divided the critics at this year’s Cannes Film Festival, this minimalist sophomore outing follows two characters – Guy Pearce’s Eric and Robert Pattinson’s Rey – as they make their way across the outback. Tonally intriguing, Michôd’s latest poses numerous questions but withholds almost all of the answers.

We first meet Eric as he parks his car in a nondescript settlement on the hunt for provisions, the hardship he’s faced over the last decade since civilised society’s fall etched upon his face – half-desperate, half-mournful. The serenity of the scene is quickly shattered as another vehicle literally rolls into town carrying three armed men, who waste little time in replacing their yute with Eric’s wheels. A chase ensures, our man using the fleeing thieves’ truck against them, but after an altercation he’s knocked unconscious and left to rot by the roadside. Following up behind him is the slow-witted Rey, the sibling of one of the three men, who has recently been shot. Manipulating Rey’s blind loyalty to his older brother Henry (Scoot McNairy), Eric pursues the presumed outlaws in the hope of taking back what’s his.

Antipodeans have a fine tradition when it comes to post-apocalyptic fiction, from Nevil Shute’s haunting 1957 novel On the Beach to George Miller’s iconic Mad Max trilogy (with a third sequel, Mad Max: Fury Road, also on the way next year). First appearances may suggest that The Rover nestles neatly into the realms of Ozploitation, but it’s actually a far more ethereal, mood-driven work than most wouldn’t have expected from Michôd, especially given the tight genre trappings of his debut. Whilst filmmakers should be commended for thinking outside of the plot-based box – “Everything doesn’t have to mean something,” Rey tellingly informs Eric – there’s a frustrating sense throughout The Rover that even the merest slither of depicted (or even suggested) back story for either Eric or Rey may have pushed the piece on to greater things. As it is, we’re left to join the dots as these two disparate characters – one a hard-edged growler, the other a child-like frowner – pass the time in between long stretches on the road.

For their part, Pearce and Pattinson both do the best they can with what they’re given (the latter in particular impressing again), but we learn little about their thinly drawn characters outside of the here and now. Eric’s Ahab-like quest to retrieve his beloved car is of course symbolic of the futility of this own newfound existence – “Everything you’re about to do is entirely meaningless” states Gillian Jones’ child-pimping oracle figure, though the rusty motor itself may or may not be the true prize – while the fleeting glimpses we do get of escorted hauler trains and heavily armed soldiers suggest that the remnants of capitalism and government still endure in some far-flung corner of the country. It would be fair to say that there’s far more of Michôd’s imagined near-future dystopia to explore, but The Rover would perhaps have been better suited to a television mini-series rather than a handsome, yet thematically arid cinematic outing.