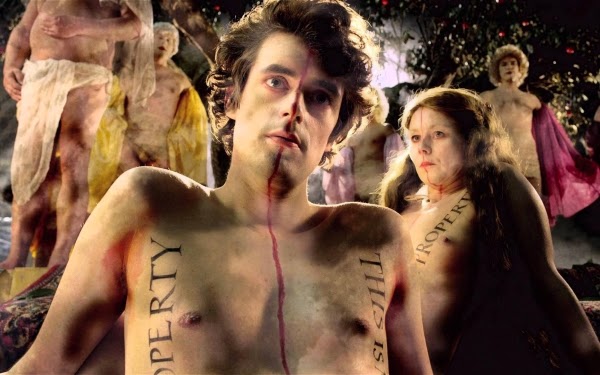 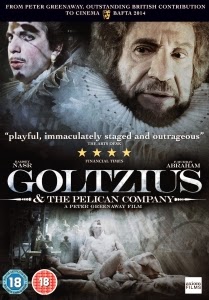 “The nipples to itch, the scrotums to tighten, the pricks to rise, the mount of Venus to swell…” goes the piquant promise of British auteur Peter Greenaway’s latest, Goltzius and the Pelican Company (2012). Bare bodies rotate around static, inactive camerawork. Baroque theatrics smudge over Renaissance architecture. Garish monologues laminated with reflections of invisible water are performed almost directly through the screen. It’s all ostensibly comical, fantastically voyeuristic and forcibly sexual; further proof that in a career now spanning over half a century, only Greenaway has the tools to deliver something that is so aesthetically and dramatically his, with no shocks other than shock itself.

Similar to fellow cinematic deviant Walerian Borowczyk, the auteur’s work is strongly influenced by Baroque and Renaissance-style staging. Sex is common and almost mechanical. Farcical horniness deep in the animated retellings of historic masterpieces. Yet the director’s reprise in style isn’t so much monotonous as it is pleasantly hypnotic; like a recurring wet dream. Shadings of Tinto Brass’ certifiably venereal Caligula (1979) are pocketed in Goltzius’ more opulent moments. And still, beyond the naked bodies and artistic extravagance is rooted not only a narrative but one with a theoretical keynote. Based on the life of Dutch painter Hendrick Goltzius (Ramsey Nasr), the artist endeavours to persuade the Margrave of Alsace (F Murray Abraham) to invest in an erotic rework of the Old Testament.

Satirical tableaux of Lot and his daughters, David and Bathsheba and Adam and Eve are all stripped of their biblical decency (and clothes), performed to an outraged panel of onlookers. What should be a derivative idea from a towering contemporary director becomes a poignant social commentary of our current media system’s monomania with sex as our apparatus for communication. It’s an astute critique on, as Greenaway suggests, how “every new visual technology, sooner or later, gets into bed with lechery”. The debauched perception of modern entertainment are scrutinised through insult and burlesque. It may be a desensitised vision of our future, but an apt one it is, delivered with majesty and spice. Goltzius and the Pelican Company is the second instalment of what Greenaway has deemed his Dutch masters trilogy. So far, the series is standing up to be a worthy addition to Greenaway’s canon of work. It’s just a shame that the shoe-string budget he so frequently seems to depend on can make his productions vaguely jarring for the eyes.