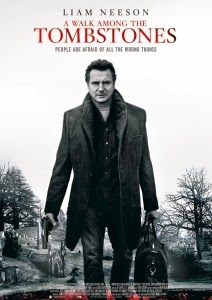 There’s an endearing nature to Liam Neeson’s action-hero exploits – what CineVue’s Chris Fennell dubbed “Neesploitation” – over the years. The man who won an Oscar nomination twenty years past for Schindler’s List (1993) is now a more bankable hardman than Schwarzenegger and Stallone, and yet little before 2008’s Taken suggested such a second career for someone of Neeson’s gruff appearance. Perhaps the tragic death of his then-wife Natasha Richardson was the catalyst. There’s a gravitas and indeed a tragedy that makes him effortlessly identifiable in these madcap parts. Just look at how many ‘former’ roles he plays – an ex-CIA man in the Taken films, a reformed convict in The Next Three Days. 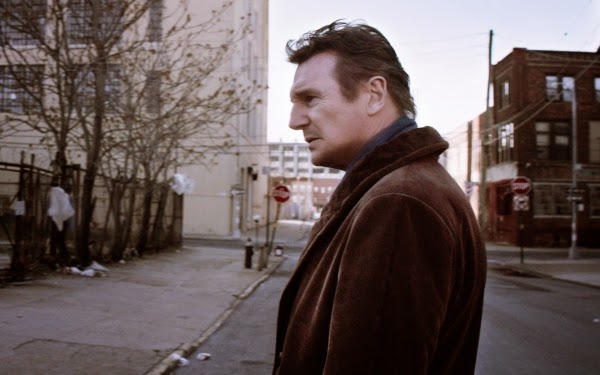 In Scott Frank’s A Walk Among the Tombstones (2014), Neeson plays an alcoholic former NYPD cop. Someone trying to undo past wrongs – surely something we can all connect with? Neeson is Matt Scudder, an unlicensed private investigator who dropped out of the force after a tragic gun-fight in a bar, arriving at the start of the film eight years sober in 1999 (cue a dozen overwrought Y2K references). Scudder is tasked with finding the killers of a drug kingpin Kenny Kristo’s (Downton Abbey’s Dan Stevens) wife, at first refusing the $20,000 pay until he uncovers the killers are likely to strike again. The B-movie thrills in Frank’s film are backed by some clammy cop-drama clichés (a black sidekick comes in to rattle off stereotypes), but this is a far more emotionally rich film than some of Neeson’s past exploits.

There’s a restraint to Scudder that marks A Walk Among the Tombstones at pushing for a more complex reading, even if it does all end with a big gunfight in a ceremony. As he digs deeper, our man finds himself at edge with the gruesome scenes he saw as a cop, and afraid he himself might fall back into the violence and alcoholism that crippled him. Stevens looks essentially unmoved by his wife’s murder, but he does effectively give the impression that something dark is lurking beneath the surface, and his American accent is an improvement on the accents Neeson achieved in many appearances. Boyd Holbrook, as Kristo’s motley brother, shows hidden depths to his character when his military past is revealed. Only Brian ‘Astro’ Bradley’s TJ comes across as severely underdeveloped in his relegation to African-American sidekick.

For the most part, it’s a thoroughly engaging thriller, without the gripping PI tension of Ben Affleck’s Gone Baby Gone (2007) – there’s a lot of Neeson going in and out of buildings interviewing people – but when push comes to shove, A Walk Among the Tombstones carries its B-movie thrills with aplomb. How much further the grizzled 62-year-old has left in the tank is hard to gauge, but this crime drama played on a minor key is certainly more engaging than some of his latest shoot-em-ups. Still, this is a film that will probably be forgotten within months, so is it too much to ask that Neeson to stop being a ‘former’ dramatic actor and take on some of the parts where he can really use his great dramatic heft to memorable roles?