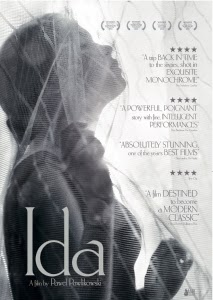 British-based director Paweł Pawlikowski (My Summer of Love) has spent his entire career thus far outside, geographically at least, his native Poland. Now, with his fifth feature film, he journeys back to rediscover his homeland along with his two lead characters in the stunningly beautiful Ida (2013). It’s a trip back in time to the sixties, shot in exquisite monochrome and telling a fairly intimate tale which can’t help but feel incredibly personal to its director, despite its eminently bleak tone. Bolstered by exceptional performances from Agata Kulesza and newcomer Agata Trzebuchowska, Pawlikowski’s latest could be a dark horse for next year’s Best Foreign Language Film Oscar, submitted as it is as Poland’s entry. 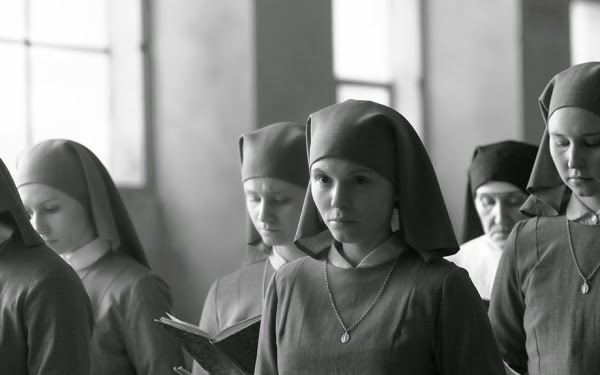 Ida begins with Sister Ana (Trzebuchowska), an orphaned young nun about to take her vows in a small rural Polish convent. Before she can, however, Ana is directed to leave her cloistered surroundings and experience a little of the wider world by taking a trip to meet her only living relative, her aunt Wanda (Kulesza). After being informed that her family was actually Jewish, and that her real name is Ida Lebenstein, Ana and Wanda set out in search of the nun’s parents’ graves to finally lay the matter to rest before she can commit herself to her saintly calling. Along the way, the pair pick up a hitchhiking – and consequently smitten – jazz musician (played by Dawid Ogrodnik). While the two woman set about contemplating Ana’s future, our protagonist’s older relative must also come face-to-face with her tragic past.

Religion and anti-Semitism in Poland are tackled head-on whilst the characters must also confront their shared tragedy. It’s in dealing with their losses that their fates are both set, and the film’s scope can easily be widened to a people, and a nation, still grieving despite spearheaded a glorious regeneration. Trzebuchowska conveys completely the wrenching of her spirit between these new faiths and the allure of a very different life more akin to Wanda’s. Kulesza is equally enthralling as the free-thinking atheist clearly looking to drown her sorrows in a bottle of liquor. That both actresses provide such expressive insight in subtleties and unsaid words only makes them all the more poignant. Most remarkable of all is Lukasz Zal’s elegant lensing. Apparently on the crew as a camera operator, he stepped up to fill the roll of cinematographer when the original candidate dropped out and was more than up to the task. His black and white visuals are sublime, with every single frame worthy of being hung on a wall. It’s one of so many admirable elements of Ida, a film that ultimately has a lot in common with its lead character: sobriety, restraint and, most importantly, mesmerising eloquence.

This review of Ida was originally published on 17 October 2013 as part of our extensive London Film Festival coverage.