Film Review: ‘In Order of Disappearance’ 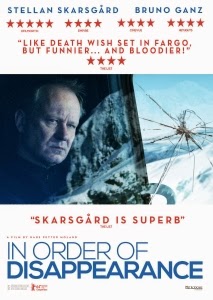 The Norwegian protagonist of Hans Petter Moland’s In Order of Disappearance (2014), Nils Dickman (Stellan Skarsgård), is a plough operator by profession, steadily carving a path towards his destination. It’s perhaps this occupational characteristic that best explains how such a man can turn from a respectable ‘citizen of the year’ into a vengeful vigilante. When his son, Ingvar, is murdered, Nils’ despair finds a purpose when a chance for revenge presents itself, beginning what will prove to be a bloody quest. After an abandoned suicide, Nils discovers Ingvar was inadvertently involved with some particularly nasty drug dealers and commences with dispatching the men.

Each kill is given its due by cutting abruptly to a black intertitle bearing the victim’s name, setting up a tone of irreverence from the start. This is a film in which no death is overlooked, and yet all dead are simply obstacles to be cleared on Nils’ path to retribution. That path, we are shown, will eventually lead to The Count – (an eye-catching, fantastically over-the-top Pål Sverre Hagen) an entitled, vegan, narcissist, in control of a vast drug empire in which territories across the country have been divided between his boundary and a family run Serbian clan. Both the incongruity of mild-mannered Nils as a cold-blooded killer, and The Count’s depiction as an oblivious clown announce that more than a state of the nation treaty, Moland’s In Order of Disappearance is a dark fable played firmly for laughs.

Though Nils’ mission of revenge is wrought from great tragedy, the seriousness is undercut at every turn with wicked humour, maximising gags both wordy and highly visual. Whether it’s The Count casually handing out lattes whilst his men torture a rival mule, or Nils’ raised eyebrow at the suggestion from his brother that he’s incapable of murder, Moland and writer Kim Fupz Aakeson consistently keep the tone just on the boundary between gruesome and ridiculous. Whereas Hagen plays The Count oscillating between cool, collected hipster dad and enraged gangster from one moment to the next, his Serbian counterpart, ‘Papa’ is presented in deadpan contrast by a superb Bruno Ganz. With a demeanour of boredom, Papa doesn’t have to try hard to make his enemy appear utterly inept. And the ineptitude of men is essentially a key theme here with the Norwegian title, Kraftidioten (‘The Prize Idiot’), making explicit that a fool will always been shown short shrift.

Another key theme signalled by The Count’s battle with his Serbian equivalents is racial tension. Continually referring to Papa and his gang as “the Albanians”, The Count’s ignorance is used to present him as a figure of ridicule, and yet references to a national anxiety around immigration occur on the ‘good’ side too, as Nils is called a “fully-integrated immigrant” by his friend. Though also intended to tickle, this is perhaps the one element of In Order of Disappearance that might sit less well with foreign audiences, where both seemingly benign conversations between gangsters about welfare in hot countries and more extreme tirades such as The Count’s against “lousy Eastern European monkeys” might seem a jarring approach to referencing the current new conservatism in Norway, in a film that’s otherwise a joy to watch.

This review of In Order of Disappearance was first published on 21 June as part of our Edinburgh Film Festival coverage.