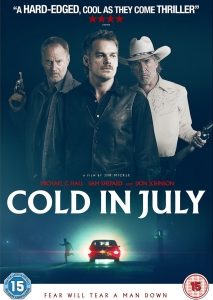 After dabbling satisfyingly with horror in his three features so far, director Jim Mickle adopts a decidedly different pace with Cold in July (2014), a violent crime thriller adapted from Joe R. Lansdale’s novel of the same name. In his first major role since TV’s Dexter plunged his knife for the final time, Michael C. Hall makes a welcome return to the big screen, demonstrating how his collected and effortlessly engaging manner can lift even the most average material. Set in East Texas in 1989, Hall plays Richard Done, a mulleted, mild-mannered everyman and devoted husband and father, whose moderate life takes a dramatic turn when, after being awoken one night, he fatally shoots a burglar in his home. 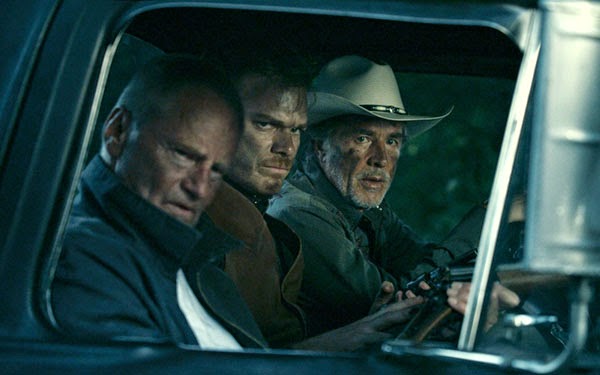 Unwilling to accept the new, unwanted label of small-town hero, Richard tries to move on, but quickly finds himself menaced by the recently released from prison Russel (Sam Shepard), father of the young man Richard killed in self-defence. Fearing for his family’s safety, Richard takes it upon himself to stand up to the murderous ex-con, especially when the police fail to prevent threats being made against his infant son. Events take unpredictable turns, however, when Richard stumbles upon a wealth of corruption regarding the true identity of Russel’s son, leading both men to team up and go down a treacherous road in search of the truth. Shot with an excellent eye, this pulpy, noirish tale of violence and fraught masculinity excels when it offers audiences a heady concoction genres.

Mickle deftly weaves these together into a mostly cohesive whole, starting as a throwback to a particularly eighties style of slasher movie – especially throughout Russel’s numerous domestic threats – and ending as something resembling an all-out action thriller. However, a baggy middle section unfortunately weighs things down and brings the story to a near-total standstill. In theory, this midpoint should be the film’s finest section, setting into motion and clearly delineating the full extent of the surreptitious nature of what’s actually boiling beneath these suburban surfaces. Instead, it only allows proceedings to become progressively less gripping. As a feature-length demonstration of its director’s multifarious genre admiration, Cold in July comes highly recommended, if only it wasn’t for the spiky and stifling tonal shifts.