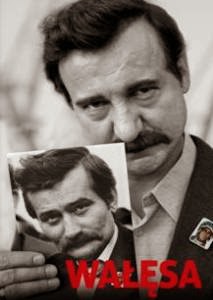 One might presume that filmmakers would slow down and smooth off the edges in their dotage, regardless of the material or  the formal experimentation of their youth. Fortunately, there are many that defy that expectation. The 84 year-old Jean-Luc Godard’s abrasive Goodbye to Language 3D (2014) is about as far from safe as one can feasibly imagine while Polish master – and fellow octogenarian  Adrzej Wajda seems just as unwilling to fade quietly into retirement. His fifty-fourth feature as director, Walesa: Man of Hope (2013), is a gripping biopic of a national and personal hero, humming with an infectiously rebellious energy that belies his advanced years. 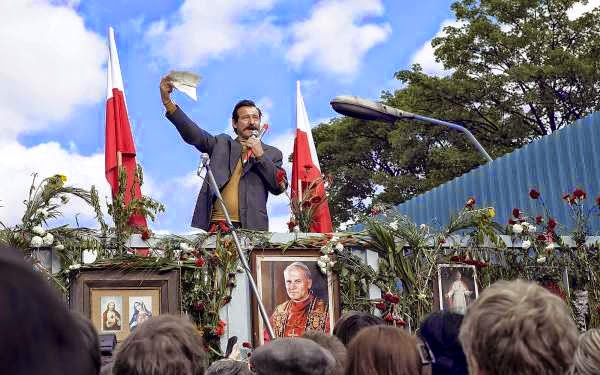 The film’s subtitle places Walesa in exalted company within Wajda’s canon, creating a cord between itself and his previously lauded diptych about communist resistance from workers elevated to iconic status. Both Man of Marble (1977) and Man of Iron (1981) are, ultimately, fictional narratives within the real-life orbit of Lech Walesa. The latter film’s protagonist is clearly a stand-in for the ship-worker turned politico, but here he gets to take centre stage – and boy, does he seize that opportunity. Framed by a subsequent interview with a foreign reporter, this is the story told from the point of view of the bullish and principled Walesa (Robert Wieckiewicz), a common man who, as it transpires is somewhat fond of the spotlight.

Wieckiewicz is exceptional as the moustachioed idealist who purportedly (and allegorically) “removed the very first brick” from the Berlin Wall by spearheading the formation of the Soviet Bloc’s inaugural trade union. He expertly conveys the bravado and moral outrage in all its fiery bluster; an implacable negotiator but also a relatable family man. Part of his charm and appeal to the people also allows for different facets of his persona to be explored. His regularly neglected wife, Danuta is played with conviction by Agnieszka Grochowska in what amounts to a far better showcase for her talents than Krzysztof Zanussi’s recent Foreign Body (2014). Adored by Lech, she is still regularly left to cope with six children as he wiles away for days, weeks, or sometimes months in prison after his latest regime-challenging rally. Equally she is drowned out by clamouring throng of admirers. Rising to the head of the Solidarity movement as it spread like wildfire through Poland and beyond at the beginning of the 1980’s, Wajda is certainly engaging with a personal idol, but he never allows the film to drift in hagiography. The unreliable narrator – Lech himself – always keeps audiences alert and even then, the picture is not entirely positive. This just makes Walesa: Man of Hope all the more compelling – a turbulent period of history soundtracked with suitably anti-establishment punk rock, as a flawed but charismatic man tries to lead his country and its people to monumental change.