Film Review: ‘Stations of the Cross’ 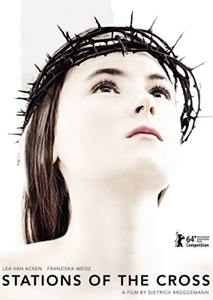 Rigidity is both alpha and omega in Dietrich Brüggemann’s stark and startling new religious drama, Stations of the Cross (2014) which arrives in British cinemas this Friday on the back of much festival praise. With form echoing function it is aesthetically austere and structurally meticulous in telling the story of a young girl whose saintly altruism is predestined to end in tragic martyrdom. Built around an exceptional lead performance from débutante Lea van Acken, Stations of the Cross is a captivating and visually arresting catastrophe designed as a series of fourteen almost entirely static shots in which characters movements must shift and shape the elegant compositions. 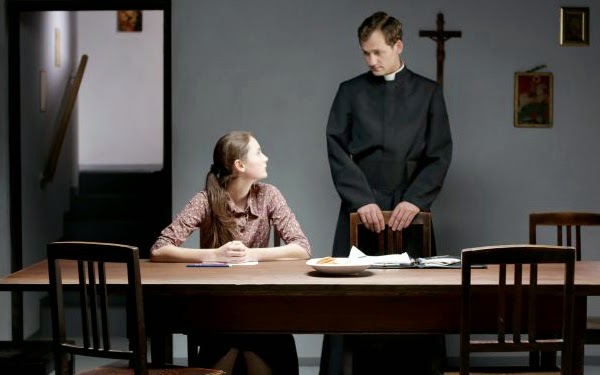 Each intricately staged shot constitutes a separate scene, and each scene is inspired by one of the fourteen stations of the title. These are traditionally a series of depictions of Jesus’ final journey; here, with white text on a black title card announcing each new chapter, they are glimpses of Maria’s life taking a similar symbolic trajectory. She is a fourteen year-old (of course) whose strict spiritual upbringing has taken place within the Society of St Paul. Based upon the real-life Society of St Pius X, they are an offshoot of Catholicism that has rejected Rome’s authority and encouraged a far more disciplined faith that inducts its worshippers into the army of the church. Maria is one such believer, played with heartrending conviction by van Acken as she wrestles with notions of sin and sacrifice.

The stall is set from the introduction of the opening chapter titled ‘Jesus is condemned to death’ and intentions are further alluded to when Maria is asked who a warrior of God should fight for; “For his family.” Brüggemann’s film, co-written with his sister Anna, is wickedly subversive and – at times – darkly comic. It clearly seeks to use Maria’s selflessness – deployed in the hope of aiding her sick younger brother – to expose the fundamental dangers of religious fanaticism, particularly overt in the portrayal of her terrifyingly righteous mother (Franziska Weisz). At the same time, there is always grace amidst the restraint; the formal strictures evident in the narrative and style represent limitation but equally sire inspiration. There is absolutely indictment inherent in the film’s final destination, but it is dogma – rather than belief – that is the cross that she must bear on her passage to it.

That passage is filmed with piercing clarity by cinematographer Alexander Sass painting the tableaux with a muted palette that complements the aforementioned rigour. Only three of the shots involve camera movement, otherwise requiring the cast to move in for their own close-ups which seems appropriate as Maria probes at her surroundings – questioning some aspects, embracing others. The structure is one that Brüggemann has employed previously, in Neun Szenen (2006), but here is perfectly encapsulates the restrictive nature of hard-line doctrine, whilst allowing the sublime to occur within that framework. It makes Stations of the Cross a film far more subtle, funny, beautiful, damning, and transcendental film that it might initially appear.