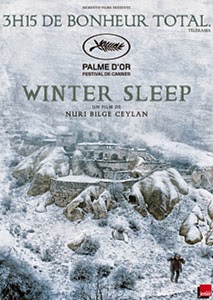 A sprawling, almost empty hotel ensconced in the Anatolian steppes plays host to inhibited and isolated souls in Nuri Bilge Ceylan’s captivating, slow burner, Winter Sleep (2014). A deserved winner of this year’s Palme d’Or at the Cannes Film Festival, Ceylan’s latest is a claustrophobic chamber piece spun out into a vast, rich and beautifully intricate tapestry. Woven at its centre is Aydin (Haluk Bilginer); a grey, bearded, landowner who dispenses hortatory with relish, but whose own moral authority may be somewhat questionable. Driven by discourse on conduct and self-deception, a series of conversations form the narrative, resulting in a majestic and subtly rendered multi-character study. 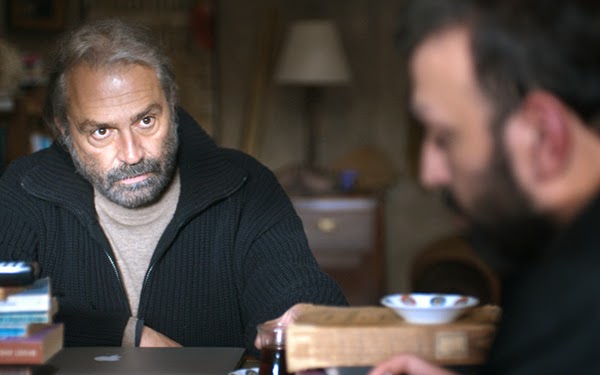 Long before the snows set in, the atmosphere shimmers with frost as strained relationships are introduced before being prised open by needling exchanges and deeply held reproach. Although not primarily a filmmaker renowned for his dialogue, here Ceylan wields his pen, in a script co-written by his wife Ebru (with a little inspiration from Anton Chekhov) to spellbinding effect. Once the scrutiny begins, almost every conversation is electrifying, and manages the impressive feat of shifting the ground beneath the audience, testing and teasing allegiances and preconceptions. This is not a story built on plot twists, or dramatic revelation – the film never threatens to rise above the director’s trademark pace and timbre – instead we bear witness as Ceylan slowly unravels the lives of these complex and expertly drawn characters.

Both Aydin and the establishment in which he resides are remote and apparently hewn from the surrounding landscape itself. His hunched shoulders and thick coat may be protection from the gathering cold outside, but it is clear that relationships with his young wife, Nihal (Melisa Sözen) and his divorced sister, Necla (Demet Akbag) are scarcely warmer. After the two women retreat from a bitter verbal sortie with one another, Necla engages in a fascinating and ultimately contemptuous duel with Aydin that illustrates them both to be equally as petulant and pig-headed as one another. An arrogant, self-aggrandising former actor, Aydin demands (rather than commands) respect and contrition whilst simultaneously despising those that are willing to give them. Ceylan isn’t interested in merely vilifying one player in this painful game – where passive aggression reigns supreme – and even with a tear running down her angelic cheek, Nihal’s own weaknesses are laid bare. Sözen is exquisite in the face of the erosive condescension of her husband; his pointed criticism of her bookkeeping and charity work are as genuinely unpleasant as they are cringe-worthy. Later, in a tension-filled interaction with a pair of brothers who rent their three room home from Aydin, she is appalled by a hostile and fiery reflection of her own pride.

Gökhan Tiryaki’s photography is a joy to behold, colouring the desolate locale in suitably wintery hues, even in scenes that unfurl in rooms lit by flickering firelight. Wide shots of figures silhouetted against their surroundings emphasise a sense of loneliness, both emotional and physical, and the visuals complement the intimate tragedy painted upon Ceylan’s expansive canvas. Staged in a purposely theatrical manner – Aydin’s pompous, and unwritten, magnum opus is a history of Turkish theatre – Winter Sleep is a quiet masterpiece that uncovers the hypocrisy of its players and is never anything less than mesmerising.