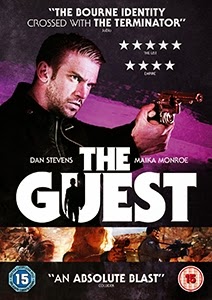 One era’s genre cinema becomes another generation’s cultural harvest. As the cycle repeats itself, the line between pastiche and revisionism becomes increasingly tenuous and viewers can find themselves becoming lazy purveyors of B-movie nostalgia. For revivalism to work, the film must primarily function on its own terms. It can trade in genre scavenging and meta nods, but the foundation is lost if it is built entirely on such flimsy ground. Nicolas Winding Refn’s Drive (2011) acknowledged its debt to the thrillers of the VHS era, but wasn’t shackled to them. With The Guest (2014), promising young horror director Adam Wingard joins the legions of filmmakers who have learned the wrong lessons from Drive. 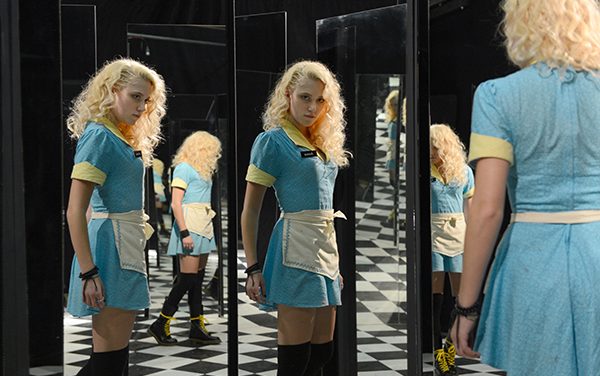 Wingard came out of the gate strongly with A Horrible Way to Die (2010), giving us a horror rendition of Antonioni’s Red Desert (1964). Even his leap for the mainstream with You’re Next (2013), with its taut structure and lithe thrills, contained just enough subversion to satiate more adventurous genre fans. The Guest, sadly, is a step backwards. With a terrific premise and two commanding performances from Dan Stephens and Maika Monroe (from next year’s tremendous It Follows), it has everything going for it, but Wingard gets mired in his eagerness to flaunt his genre credentials, losing any impact the film could have otherwise had in the process. Stephens’ titular visitor is a mysterious figure who shows up at the home of a family who have just lost their son in combat.

He claims to have known the dearly departed, but there is clearly something more insidious at play. The first act is strong, with pared-down violence and a commendable reliance on atmosphere, pointing to a first rate revisionist heartland thriller. Things go wrong at the point when the plot lapses into televisual conspiracy narrative. When this misguided direction becomes apparent, Wingard’s hitherto palatable genre references become accentuated into shameless pleas for attention. A reminder of some of Walter Hill and John Carpenter’s finest stylistic moments is fine, but they are not means to an end. Jim Mickle made them work in the superior Cold in July (2014) by integrating them into a narrative that had already established a clear identity of its own.

Wingard’s shots, on the other hand, are cheap and are likely to only resonate with the most easy-to- please B-movie fans. It’s curious that cult cinema disciples are willing to tolerate such facile self-consciousness just to be reminded of the glories of the VHS canon. Such pointless nostalgia is self-defeating and could mean that audiences miss the glorious new B-movie revival that’s already taking place before their eyes, thanks to a group of enterprising French directors under the auspices of Luc Besson. This is the era of Neesploitation; the cinema of Liam Neeson as actor-auteur, fronting brilliantly economical, stripped-back thrillers that are not overly indebted to yesterday’s cornerstones. Stop fawning over cheap nostalgia like The Guest and behold the thrilling new chapter for the B-movie.