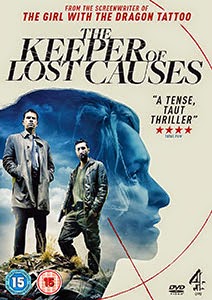 Nordic noir has been doing brisk trade on both page and screen over the last few years, cannily stimulating an apparently global appetite for a slew of flawed detectives and macabre investigations from the region. Although there have been some successful cinematic outings, it is actually on the small screen that the genre has made its most prominent splash, which is sadly where The Keeper of Lost Causes (2013) feels as though it belongs. Based on Jussi Adler-Olsen’s international bestseller and brought to life by Mikkel Nørgaard – the director responsible for raunchy comedy Klown (2010) – its unsettling crime and detective odd couple aren’t enough to elevate this largely forgettable affair.

The Keeper of Lost Causes’ conceit is a well-worn one. A gruff and hotheaded Danish cop, Carl Mørck (Nikolia Lie Kaas), finds himself transferred to the cold case division in the basement after a raid goes wrong, which sees one colleague in the hospital and another in the morgue. Equipped with a new assistant, Assad (Fares Fares), Mørck is ordered to quickly process the unsolved crimes with an emphasis on sitting behind his desk. Mørck’s natural inclinations lead away from the office, however, and it’s not long before he and new partner Assad are digging into a particularly nagging conundrum – the fate of a promising young politician (played in flashback by Sonja Richter) who apparently committed suicide aboard a ferry five years previously. Predictably, not everything is as it initially seems.

The Keeper of Lost Causes feels less like a feature film than the pilot for a new sleuth show, and apparently a follow-up is already in front of the camera. Adler-Olsen’s source novel is in fact the first in a series of Department Q mysteries and this instalment feels unfortunately like a whole lot of setup without any real pay-off. The plot is predictable and unsatisfying – even if there is a disconcertingly twisted scenario at its centre – while none of the characters are fleshed out enough to particularly engage. This is especially true of the supporting cast whose place in the formula, as victim/villain of the week, requires only broad strokes and hackneyed motivations.

Kaas has been well-chosen as the abrasive Mørck, convincingly intelligent and trying, while his mismatched pairing with Assad brings humour and warmth. Indeed, this relationship is the film’s greatest asset and it would have been nice to see more development of the two gumshoes and their interactions. Presumably, all of this is being held back for the sequel, The Absent One (2014). As an entry into the Scandi police procedural genre, The Keeper of Lost Causes disappoints. As a TV pilot, however, it’s serviceable yet unremarkable; the kind of thing that you’d probably give a couple more episodes in the vain hope that things will pick up.

This review was originally published on 27 August for the theatrical release of The Keeper of Lost Causes.