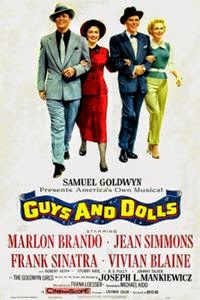 Damon Runyon is often imitated but never bettered – we won’t even hold it against him that he’s partly responsible (via proxy) for the gangster films of Guy Ritchie and his ilk. Runyon’s portrayal of the New York underworld and it’s denizens with their peculiar argot seems to sound familiar and strange at the the same time to modern ears, but when it arrived in his tales published in the late 1930s it shone a light on an epoch that previously had only been know via arch genre films. Now, of course, this world is mostly known from Joseph L. Mankiewicz’s film version of Guys and Dolls (1955) that has been beautifully restored and re-released. 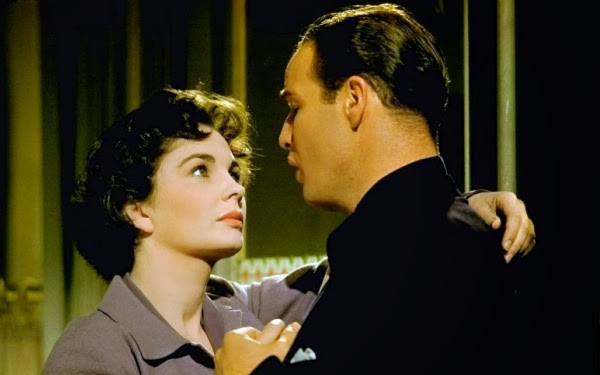 The central duo – who reflect back such difference at each other, and have been called mismatched – are Marlon Brando, as Stylish degenerate gambler Sky Masterson, and desperate craps game facilitator Nathan Detroit played by Frank Sinatra. Reports suggest there existed much enmity between Brando and Sinatra, coming mainly from the envious and insecure Sinatra who wanted to play Masterson rather than Detroit. He also felt aggrieved that Brando was cast as Terry Molloy in On The Waterfront (1954). This is one of many reason this film works when it probably shouldn’t. Nathan Detroit, a chancer who has been engaged for 14 years and refuses to capitulate, needs a place to hold his legendary Craps game but the police are on his case.

He needs $1,000 so he bets legendary high stakes gambler Sky Masterson that he can’t take a woman of his choosing to Havana. The catch, that the ‘doll’ is in fact the pious sergeant Sarah Brown (Jean Simmons) from the Save Our Soul Mission (standing in for the Salvation Army). Game on. Guys And Dolls is unique in musicals as what is spoken is perhaps more important than the songs and dances. In fact the argot itself is as rhythmical and musical as any of the numbers. The leads are surrounding by poetically-named crooks and deadbeats: Harry The Horse, Nicely Nicely Johnson, Benny Southstreet and Big Jule; who make this milieu soar past the musical anti-realism that is necessary. Runyon’s source offers us broad slang with a mock pomposity that breaks down our prejudices and allows us to savour these nefarious characters and see them for what they are: seekers and hiders, lovers and leapers and most importantly playing of self determining role that ultimately must be broken.

Naysayers at the time were not impressed with the casting of Marlon Brando and Jean Simmons as they weren’t musical theatre performers and many scoffed at their singing but they perform their numbers with a sincerity and feeling that is instilled with pure emotional honesty and makes these characters come to life. Combined with Sinatra’s acting style and voice it makes a lovely juxtaposition between the two avenues of performance, neither of them right or wrong, just believe and livable. It was once said that Runyon’s prose had a ungrammatical purity about it (what with the refusal of the past tense), but likewise Guys And Dolls works because it shouldn’t work, added with the two great numbers: Brando’s epic performance of Luck Be A Lady Tonight and Stubby Kaye’s transformative Sit Down, You’re Rocking The Boat.