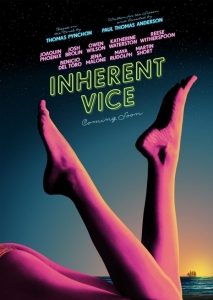 There Will be Blood (2007) gave us the birth of American capitalism, The Master (2012) doused us in the uncertainty of post-war malaise and now Inherent Vice (2014) takes us to the crossroads of the modern Californian ethos. This is Paul Thomas Anderson’s American history trilogy – how the West was won, bought and sold. Gore Vidal called his own series of historical novels the Narratives of Empire; it would be an apt title for PTA’s trilogy, which serves as a document of the 20th century incarnation of that pioneer spirit. Daniel Plainview, Freddie Quell and Doc Sportello may initially seem like a disparate group of characters, but that spirit connects them. Each is a pilgrim staking his place in the New World.

An hilariously louche and ramshackle psychedelic noir, Inherent Vice is an audacious stylistic leap for Anderson, but his risks pay off beautifully. It’s an amazing work, capturing the heady vibe of Thomas Pynchon’s novel while stumbling into the great cinematic lineage of California noir. Joaquin Phoenix plays affable stoner P.I. Doc Sportello who is investigating the disappearance of a shady real estate mogul. The plot is molasses-thick, but its tangles and apparent dead-ends are where PTA works his magic. The Summer of Love is over and yesterday’s dream is tomorrow’s nightmare. The shadow of Cielo Drive hangs heavy over everything; the hippies are under constant suspicion and the authorities are thirsty for blood. The sun is setting on the co-counter-culture; the Nixon era is dawning.

Los Angeles is a city adept at shifting its identity following a crisis in the culture. In Inherent Vice, the dark side of the hippie dream has been rapidly seized and commodified by the elite. The cult of Manson is now the reign of commerce. Inherent Vice’s city is populated by amorphous personae; policemen double as extras on cop shows, dentists run drug rings and Jewish businessmen fraternize with the Aryan brotherhood. Whole areas disappear overnight, making way for housing developments and baseball stadiums. Everything is changing, but Los Angeles plays itself. This is noir through the looking glass; a corrupt civic order exaggerated to hallucinatory proportions.

And at the centre of the maelstrom is Doc; hapless and stoned. From Bogart’s indomitable Marlowe in The Big Sleep (1946) to Elliott Gould’s fatalistic rendition in The Long Goodbye (1973), the devolution of the gumshoe ideal in American cinema has always served as a barometer for contemporary malaise. Anderson and Pynchon’s incarnation of the private eye is a heightened product of the times he reflects, but he still fulfils the mythic role as a man apart; a disrupter perhaps, but one content to roll with the turning tide. Although compromised, the counter-culture in Inherent Vice is still a refuge of sorts from the changing times. The precarious transition from the 60s to the 70s will change the course of history in the city, but Anderson finds solace in the fringes. Turn on, tune in, drop out.