Comic book adaptations are fast becoming a staple element in the diet of blockbuster cinemagoers and, despite already owning Marvel, Disney have now decided to get in on the action themselves. Their first foray into the superhero universe comes in the eminently cuddly form of the inflatable robot Baymax (Scott Adsit), whose Kuleshov care warms the heart of Big Hero 6 (2014). He’s a roly-poly nanny, designed to soothe aches both physical and emotional in the futuristic synthesis of East and West that is the city of San Fransokyo. Envisioned as the ultimate carer, he provides a loveable axel around which the colourful animation and madcap fun can revolve. 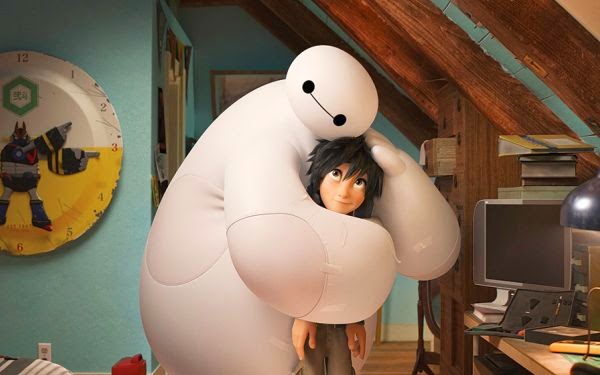 Baymax was dreamt up by Tadashi Hamada (Daniel Henney) with whom he shares a vital connection; the bond that both creator and creation have with Hiro (Ryan Potter). These relationships – particularly the burgeoning one involving the marshmallow-like A.I. – provide the central force that compels both narrative and thematic progression in this manga-style world. When Tadashi dies in a tragic accident, his super-intelligent little brother is left alone, only to find Baymax powering up in an effort to remedy his grief. An unwilling odd-couple, through their developing companionship the film probes the motions and mechanisms of mourning in a subtle enough way as to tug firmly on heartstrings while remaining suitably comic and accessible to its young target audience.

Echoing Hayao Miyazaki’s My Neighbour Totoro (1988), Baymax stands in the magical woodland spirit but is cast in a similar role of protector. This is introduced in a medical sense, but Hiro’s growing attachment to his rotund chum further explores the great lummox as both brother surrogate and, in the film’s whizbang storyline, literal hero. Perhaps it is this that has prompted evocation of the Samurai tradition – not to mention the influences in Baymax’ suit – but in actual fact such readings are lost amidst the winning humour and the emotional journey. Sadly, those are themselves undermined by the more conventional aspects of the now rote superhero origin story.

Whilst the obligatory personal tragedy fits well with the predefined structure, the side characters don’t feel rounded – or indeed, funny – enough to warrant their increasing screentime. The villain also fails to impress – a flaw evident in much of Marvel’s cinematic output, it seems – even if his motives are tied neatly back into the central concerns. He and the other five members of the eponymous team are an ideal outlet for the stunning animation of course, particularly in their two impressive showdowns, but they can’t help but remind of the humans who encroach on the audience’s quality time with Wall-E (2008). It is, after all, the Baymax show – and he is cute, cuddly, comedy gold. Fortunately, although Big Hero 6 has various flaws, he’s generally on hand to patch them.