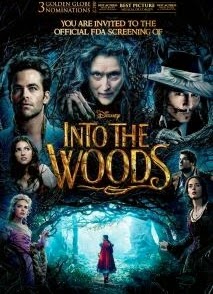 When it was announced that Disney would be making a film adaptation of Stephen Sondheim’s beloved musical for Into the Woods (2014), the ears of fans pricked up. Would the House of Mouse keep true to the sinister tone of the original or would they coat it in sugar to make it more palatable for little ones? Tasked with keeping the theatre wolves from the door is director Rob Marshall, best known for his 2002 Oscar-winning show-stopper Chicago. What he has crafted is an entertaining and highly camp magical number. For those not familiar with Sondheim’s original, it is a modern re-telling of classic fairytales that generations of children were raised on, but with a deeply contemporary twist. 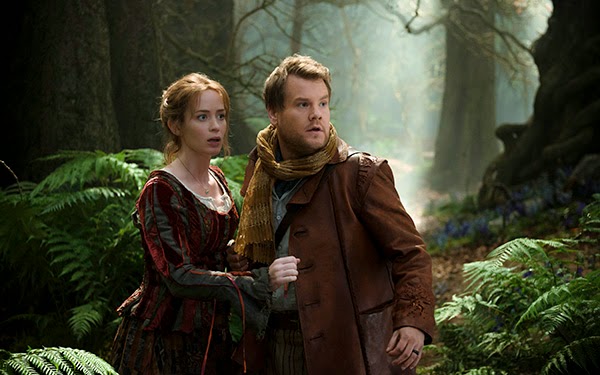 In this world, fairytale folk wander in and out of their own stories and the familiar becomes pleasingly unsettling. It is childlike, but disturbingly unsafe in many ways. There are very recognisable faces, like Cinderella (Anna Kendrick), but in this revisionist setting she is plagued with indecision reagarding whether she really wants her Prince (Chris Pine). Then there is Little Red Riding Hood (Lilla Crawford), a petulant brat with a penchant for pocketing baked goods, stalked by a leering, predatory wolf (Johnny Depp). There are also some less familiar additions in the form of James Corden and Emily Blunt as a Baker and his wife at the heart of the tale. Desperate to have a child, they are denied their wish thanks to a curse put on them by an embittered witch (Meryl Streep).

That very same witch offers them a solution, on the condition they head into the nearby woods and collect a series of objects so that she can concoct a fertility potion. In many ways the appeal is similar to Phillip Pullman’s Grimm Tales For Young And Old (recently adapted for the stage, playing in London’s Shoreditch Town Hall), which bridges the gap between younger and older audiences. Beneath the veneer of a magical tale is something altogether fundamental about human existence. Marshall has a long-running history with Sondheim, and he has clearly honoured the original, whilst making sure that his take is fully cinematic in scope. However, whilst the potential wrath of purist fans of the original will be placated, the film lacks spectacle.

This is especially true when compared to Disney’s recent Maleficent (2014) – even with the presence of the redoubtable Frances de la Tour – perhaps in part due to the relatively small budget of $50m. There are also a few pacing problems, with a slump in the second act before a deeply satisfying conclusion. But the heart of the film that appeals most and underlying the medley of witty, frequently acid-tongued show tunes, is the concept that no matter how dark it gets, and however alone we feel we never truly are. Accompanied by a hilarious Emily Blunt (who once again displays sharp comic timing), Streep in full flare, and Chris Pine in an agonisingly good performance, Into the Woods makes for an unusual, incredibly pleasurable watch.