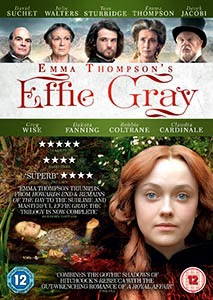 Euphemia ‘Effie’ Gray was just twelve years old when esteemed Victorian art critic and writer John Ruskin wrote a novel for her called The King of the Golden River. It was a fable and the fairy tale looked like having a happy ending when some seven years later, Ruskin and Effie married, but things were not to turn out well. Due to an intense aversion to his young wife’s body – an infamous case of Victorian repression – the marriage was never consummated and began to slowly decay until Effie made the courageous step of seeking an annulment. Richard Laxton’s Effie Gray (2014) is a straightforward and somewhat televisual retelling of the oft-told story from a script by co-star Emma Thompson. 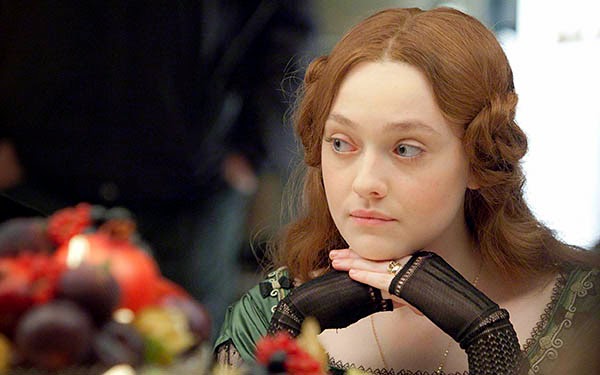 Dakota Fanning plays the wide-eyed ingénue who we first meet having already married the older Ruskin, played by Greg Wise. We are never quite sure what her attraction to him is, short of admiration for his fame, and she quickly realises she has made a mistake. It is not only that Wise’s Ruskin is a cold fish and a bit of a whiner, but he’s also in the thrall of his coddling parents, mainly his domineering and unsympathetic mother played by Julie Walters who views Effie with undisguised contempt as an interloper and possible threat. Poor Ruskin hasn’t had a good rap in the cinema this last year or so. He popped up in Mike Leigh’s Turner (2014) as a pontificating pipsqueak played by Joshua McGuire. But here it is even harder to find anything to like.

Even when he is doing what he is supposed to do best – talk about art – he comes across as a pretentious blowhard. His cruelty and self-involvement are thinly disguised in a cool withdrawn manner. In a visit to Venice, Ruskin shuns social engagements while Effie makes the most of it with a wonderful though all too brief appearance by Claudia Cardinale’s aging dowager and her handsome nephew Rafael, played by Italian heartthrob Riccardo Scamarcio. Plagued by dreams and a mystery ailment, Effie is tempted with an obvious outlet for her frustrations by the young Italian but resists. Returning to England and from thence to Scotland, Effie is once more tempted by Ruskin’s protégé John Everett Millais, who has been commissioned to paint the critic’s portrait, but again it is a tale of melancholy restraint. And so it goes. An image of Millais’ Ophelia recurs throughout the film and we are supposed to draw parallels between the drowning Shakespearean heroine and the slow suffocation of Mrs. John Ruskin.

However, the languid nature of Fanning’s performance and the essentially undramatic proceeding of the plot – the main point being no one does anything i.e. Ruskin doesn’t have sex with Effie and Effie doesn’t have sex with John – makes this a passionless exercise. The sitter for the painting Elizabeth Siddal who married Rosetti and killed herself makes for a more dramatic parallel perhaps. Laxton has an eye for a landscape and Scotland and Venice both appear at their finest, but Thompson’s screenplay is static and the troupe features a who’s who of established British talent from Robbie Coltrane to Derek Jacobi. Thompson casts herself in the self-aggrandizing role of the wife of Ruskin’s patron who seeks to help Effie and lift her out of her moribund marriage. It is what the film is trying to do with Effie Gray from the footnotes of history, but unlike Ralph Fiennes’ The Invisible Woman (2013) and Jane Campion’s Bright Star (2009) Effie Gray doesn’t escape the staid atmosphere of the male dominated society it is trying to critique, ending up a handsomely made but ultimately unengaging melodrama.