The second film of director David Ayer’s increasingly prolific career to be released this year following groggy Arnold Schwarzenegger shoot em’ up Sabotage (2014), Fury (2014) is an epic Second World War action drama that – like each of his previous works – looks to examine the inner workings of violent men in violent circumstances on an even grander historical scale. Executive produced by leading star Brad Pitt and written by Ayer himself, the film is a bravura depiction of the harsh brutalities of war that, though monotonous, is an entirely rousing entry in the annals of great WWII cinema. Set in the spring of 1945 during the last month of the European Theatre of war, Pitt plays sergeant Don “Wardaddy” Collier. 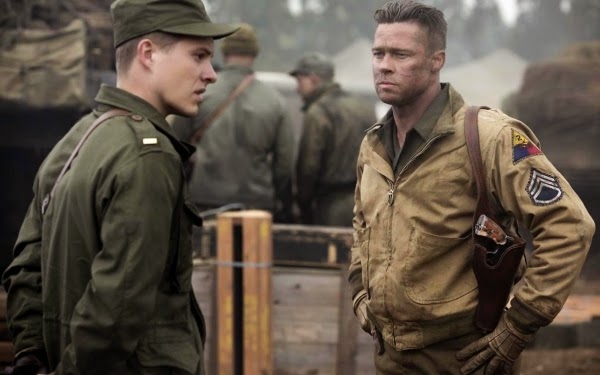 Collier is the lead commander of a Sherman tank and its three battle-hardened crewmen (played by Jon Bernthal, Shia LaBeouf and Michael Peña) who are still lamenting the recent death of one of their own. Contrasting with the other, more tongue in cheek Nazi annihilator that already adorns Pitt’s filmography – in Quentin Tarantino’s alt-history extravaganza Inglorious Basterds (2009) – Don is a bloodthirsty authoritarian weary from war but desperate to see retribution brutally dished out to whoever stands in his way. After being lumbered with timid new recruit Norman (a surprisingly engaging Logan Lerman) – who comes from a clerical background, Don et al. join the allies as they make their final push into Germany. However, the motley crew find themselves out of their depth and hopelessly outgunned.

Set almost entirely aboard the gang’s bulletproof mother ship, whose killer spout is emblazoned with ‘Fury’ in thick white letters, Ayer’s latest is a bracingly paced and at times exhilarating film about the intrinsic devastation of war, the importance of patriotism in the face of immorality and the combined benefits and setbacks of camaraderie. Amidst the numerous tensely choreographed action sequences lies a vivid depiction of a war-ravaged country caught in the crosshairs of greater forces. Once again conveying an aptitude for tension – previously shown in handheld crime drama End of Watch (2012), also starring Peña, and aided by Steven Price’s thunderous score, Ayer doesn’t delve into videogame aesthetics during scenes with heavy artillery, which are more about the effects this carnage has on the protagonists than on their largely faceless Nazi opponents. “Best job I ever had”, the crew’s motto-cum-hollow reassurance, speaks volumes about what Ayer actually wants to survey here: the need for alliance at a time of near-total unrest. It’s a pertinent theme, and one that carries Fury through a 134-minute runtime that may be slightly padded out, but is fuelled by scorching bombast nonetheless.

This review of Ayer’s Fury was originally published on 16 October 2014 as part of our London Film Festival coverage.