DVD Review: ‘In Order of Disappearance’ 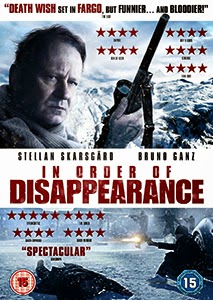 Delectable riffs of the Coens and Jo Nesbø’s Headhunters (2011) make In Order of Disappearance (2014) one of the smartest and certainly most subversive Nordic noirs of recent years. A sharp-as-ice-pick black comedy anchored by a deadpan Stellan Skarsgård performance, this acted revenge is indeed best served cold. Skarsgård’s Nils, a Swede who’s settled in the remote Norwegian tundra, is irritable and irascible, but the snow-plough driver still wins his local citizen of the year award – “the most Norwegian person here without actually being Norwegian” says one right-wing villager. But he changes when, after a botched drug operation at a remote airstrip, Nils’ son is murdered by the mob. 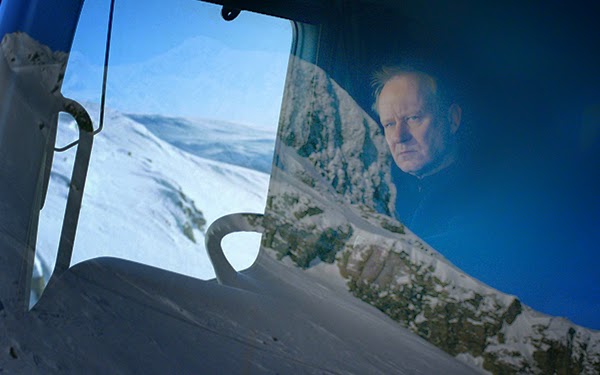 Made to look like a heroin overdose, Nils never believes his son was a junkie, and goes after the gangsters he discovers were behind the death. Skarsgård, in fine form, embraces all the creative methods the Norwegian countryside allows: forget Chekhov’s gun – when you’ve got a snow-plough, you know it’ll be used. Director Hans Peter Molland and cinematographer Philip Øgaard use the Valdres national park to stark and expansive effect. The remoteness has a nihilistic intent – if you get killed here, you’re never going to be found. After every death, a title card announces the name of deceased, which itself becomes a comic sideshow as the death count ratchets up. The nods to Fargo (1996) – another wintry dark comedy – are no accident, but it’s the ripe parodies of the region’s serious noirs that are most fun.

The gangsters prove to be shambolic assholes, led by horribly gauche Greven (a terrific Pal Sverre Hagen) whose fetish for ruthless killing is met only by his strict veganism and admiration for yucky Grand Designs-style interior design. When their rival Serbian gangsters – headed by a barnstorming Bruno Ganz cameo – arrive on the scene, they seem more interested in being tourists in the local ski resort than instigating a gang war. The film’s original title Kraftidioten (loosely translated as ‘The Prize Idiot’) lets them off too lightly. But the film doesn’t force its comedy, the jokes often come from the most serious scenarios. A trip to the morgue prompts laughs from the noise of a body storage tray, or a conversation about Serbian history when a gangster is hung next to a sign reading 1369m (“the Norwegians don’t know about the 1369 Battle of Kosovo!”) Best still is the deft way that social commentary is dealt with, discussing a post-Breivik Norway with the style of Tarantino’s characters in Pulp Fiction (1994). Kim Fupz Aakeson’s script might be derivative to some, but it captures the variety of Norwegian social culture like none of the more sombre Scandi noirs.