The crippling nature of living with severe chronic pain is a subject that affects millions of people around the world and is severely under-represented in cinema. Daniel Barnz’s Cake (2014) attacks the subject head-on and explores the often embarrassing world of dealing with support groups, pain management instructors, healthcare workers, and one’s own paralysing self-doubt about what the next day holds. As a sincere look at difficult subjects like suicide and prescription drug addiction, this could have been a phenomenal movie baring vital messages about pain and recovery. Instead, it’s as hard to take in as the Oxycontin Jennifer Aniston repeatedly dry-swallows during bouts of extreme muscle pain. 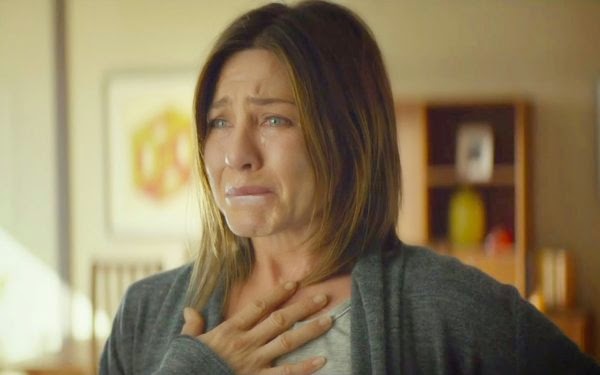 Aniston plays the temperamental Claire Bennett, the type who only sees the world in black and white after being left with a body full of scars and severe muscle pain following a car accident that also killed her only son. She’s become bitter about her situation in life and takes out her frustrations on the few people that have stuck around to help her, especially her housekeeper and primary caretaker Silvana (Adriana Barraza, right). After one of her group members commits suicide, Claire journeys out on a macabre mission to befriend her devastated husband Roy (Australian actor Sam Worthington) and his five-year-old son Casey (Evan O’Toole). Frustratingly, one of the main problems this well-meaning drama suffers from is the belief that the more that can be squeezed into the film, the better it will be.

Unfortunately for Cake, this results in five or six different subplots that inevitably take away from the main narrative. The main message, the lifeline of the film, gets lost in the fold and suddenly the importance of Claire’s trials of living with depression that leads to suicidal tendencies and trying to navigate a world without her son, husband (played by Chris Messina), and job is diminished into nothing. Where the narrative struggles to find its footing, the acting more than makes up for. Aniston gives a great physical performance as Claire, groaning with every begrudged move. Her hair dishevelled and her clothes always strew, she’s is more than believable in her role from the beginning to the very end. Exquisite as Aniston’s performance may be, it does little for the hopeless and pointless direction of the film.

While the end of the 90-minute mark ties up a few loose ends, there are still unabridged gaps that aren’t ever accounted for. Instead, it tries to be artsy with its ambiguous finale, leaving what happened to the cavalcade of parading characters up to the viewer, but there simply isn’t enough attachment to any of the characters that made brief sporadic appearances to care about them after the credits roll. Barnz’s Cake could have been an intriguing look into the world of chronic pain and depression, but trying to be a jack-of-all-trades ruined the film and left it a master of none.