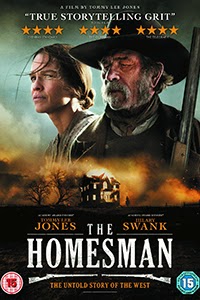 The Homesman (2014) is a rare and genuine entry into the Western film canon. It’s lyrical. It’s heartfelt. It’s gruesome. Most importantly, it endows humanity to its cast of characters who are found bearing the brunt of a gritty life on the frontier of North America. Adapted from the Glendon Swarthout novel of the same name, this film marks Tommy Lee Jones’ fourth outing as director and his third Western. Despite his firm directorial hand, its concerns are with the weight of grief and persevering nature of women in duress. After a particularly harsh winter in the Nebraska Territory, independent spinster Mary Bee Cuddy (Hilary Swank) finds herself tasked with the transport of three mentally and spiritually broken wives back to Iowa. 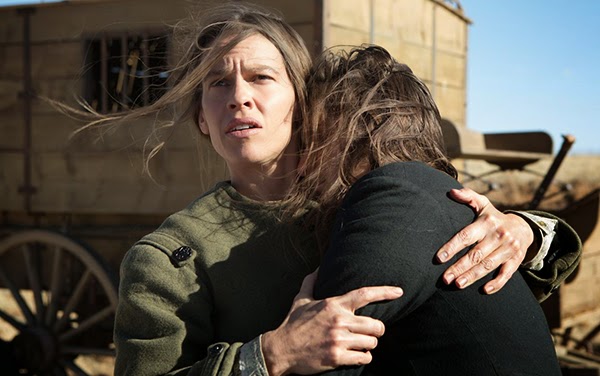 With no husband or children to keep her bound to her farm, Mary Bee sets out towards Iowa, caring for Arabella Sours (Grace Gummer), Theoline Belknapp (Miranda Otto) and Gro Svendsen (Sonja Richter). Helping in her journey is George Briggs (Tommy Lee Jones), a claim jumper freed from near death, who provides aid as well as an emotional anchoring during their time on the road. This is a refreshingly atypical Western. that shines a spotlight on frontier women, who are surprisingly neglected in the genre. Women in this world have historically been part of the backdrop, supporting characters presented for emotional guidance or physical comfort. The Homesman manages to break free of tradition while still maintaining the integrity of its genre; in doing so it presents different versions of broken women.

Arabella carries a doll in place of one of her children, who all died of diptheria. Gro’s depression over her deceased mother manifests as an intense God-complex. The weight of the psychological horrors of the frontier play out abjectly on these women; viewers are forced to reckon with the limits of their own internal strength as a result. Could anyone handle what they have suffered and still remain intact? In the case of Mary Bee, she is “as good as any man.” With a fortune amassed and a large plot of land, she is independence personified. But her loneliness shines through when she proposes marriage at two separate points.

Her power and her weakness are bound together by existing as a woman outside the realm of normativity. Mary Bee doesn’t need to lean on anyone but its a bit of relief when she is able to do so. She presents us with a model of womanhood that is as tough as the soil itself. The Homesman succeeds in its feminist moorings as much as it succeeds in its storytelling. It refuses to soften the truth and, most importantly, it ties in the markers of the Western. Tenets of honor, duty, bleak violence, and the simultaneous cruelty of lanscape and society are all evident while also presenting the notion that it is possible for women to suffer just as much as men in this world. However, in the end, redemption is always possible.