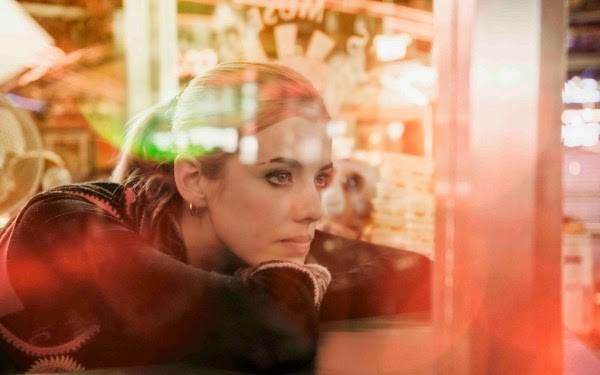 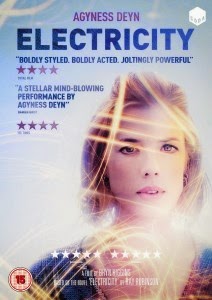 ★☆☆☆☆
The way Bryn Higgins’ sophomore feature, Electricity (2014), sees itself is perhaps an integral part of its ultimate failure. It considers itself as stylish, sexy, tough, visually inspiring and numerous other targets it misses by a country mile. In fact Electricity never gets close to any of these poised ideas. The production notes inform us that this is a modern day retelling of Alice In Wonderland, which would be true if Alice had stumbled through badly written cliche after cliche without stopping for breath to alleviate herself of the bald faced banality that consumes her. The single factor that keeps the audience alive with hope of some ‘wonder’ is the magnetic charisma and strong actuality of the revelatory Agyness Deyn.

Deyn (soon to be seen in Terence Davies’ adaptation of Lewis Grassic Gibbon’s Sunset Song) plays Lily, a twenty something drifting through her daily existence in a gone to seed coastal town in the north. Lily has epilepsy which impacts her solitary life in numerous ways, each of which is glided over with an astonishing lack of depth. These narrative deficiencies could explain the constant attempts by director Bryn Higgins to align the film with Alice In Wonderland, a tactic that seems like an after thought that never comes close to working. Higgins strives via a first person viewpoint to depict Lily’s fits in a expressionist manner, the eponymous electricity stands for her cerebral attacks that come across as if Enter The Void (2009) was sweded by Shane Meadows.

Higgins in fact has mentioned how he was thinking of the work of Stan Brakhage with these vacuous vignettes. Sadly this is pure delusions of grandeur on his part, and if anything they resemble the emulated tropes of empty music videos that attempt gravitas via the surface of the anti-sublime. The very notion of plot moving character rather than vice versa is another example of the failing of Electricity and a common ailment when tyro TV/music video/advert directors blindly make the leap to cinema. The plot that powers these empty ideas from a screenwriting seminar start with the sudden death of Lily’s mother, the reappearance of an older brother (again a terrible misuse of the always great Paul Anderson) and a younger brother missing in the ‘Big City’. With the maternal death there is a sudden cash fall which allows Lily to search for her missing younger brother.

The film seems to want to have its cake and eat it. Lily is supposed to street wise and tough but the moment she lands in London that veneer crumbles and she is robbed, taken advantage off and generally eaten up by the evils of capital living. At this point the film starts to resemble a bad episode of Hollyoaks with dialogue to match and character’s acting always against their better interests which is no doubt forced upon them so the plot can reach the end game and everyone can move on.