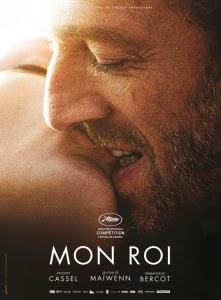 Mon Roi (My King, 2015) is a colourful yet clichéd relationship drama from French actor and director Maïwenn, playing today in competition at Cannes and representing one of several homegrown efforts. Tony (Emmanuelle Bercot), a successful lawyer, is skiing when she has a bad accident, breaking her leg. There’s a suspicion that she might have unconsciously caused the accident herself: “It might be pop psychology” says the hospital therapist, but it won’t be the last. Sent to recuperate at a clinic by the sea, here Tony reflects on an old relationship with Giorgio (Vincent Cassel). As she begins to recover her mobility with difficulty and pain, she plays out the whole of her relationship in chronological order.

Tony first meets Giorgio in a disco, where she recognises from a fleeting acquaintance of some years past. She quickly become fascinated by him – he is a restaurant owner and entrepreneur with a large apartment which includes a tropical mural and a fußball table. Louis Garrel, as Tony’s brother Sobel, nails him immediately as an “eternal teenager”. Fortunately, Cassel’s wit and charm are enough to attract Tony and convince the audience. The early relationship is all sunshine and laughing, cavorting like kids, private jokes and colourful balloons. You just know that it’s all going to end with someone screaming in a downpour. They marry and have a baby (Sindbad!) but the cracks have already begun to appear.

During the pregnancy, Tony and Giorgio argue and fight and Giorgio wants to spend some time alone. An old jealous girlfriend Agnes tries to commit suicide and Giorgio seems more intent on looking after her than he is on Tony and the imminent birth of his son. . Add to this some of his business deals have gone south and the furniture is repossessed. Tony tries to leave him but is always charmed back even though Cassel’s clowning soon becomes wearisome to all except her and his cronies. Everything is played with gusto by the excellent cast and it’s all perfectly well shot, but then it goes on and on. The suspicion is that Maïwenn was modelling her latest work on 2013 Palme d’Or winner Blue Is the Warmest Colour, but whereas Abdellatif Kechiche’s film drew us in and kept us right there until the final shot, Mon Roi simply outstays its welcome. The histrionics are ratcheted up as Tony yo-yos between wanting to divorce Giorgio and wanting to cure him. Her naiveté begins to destroy her credibility as a character and the relationship itself starts to become tedious.

Maïwenn is also guilty of resorting to some fairly simplistic scenes with a tendency to overplay everything. As Tony recuperates from her accident she makes friends with the working-class, racially diverse fellow patients (they’re so much more authentic). They all go to town in an open-top car, laughing and dancing to loud music (because she’s happy again – get it). The sexual politics seem to be very old-fashioned as well. Although the title is ironic – Giorgio styles himself as King of the Jerks – our intelligent, independent career woman is still under his spell. We never get to see her new husband, but he’s presumably rubbish in bed and a bit too serious. It’s the scoundrel – especially when he looks like Cassel – that makes girls’ hearts beat faster. However, by the end of Mon Roi one comes to the conclusion that they can keep him.