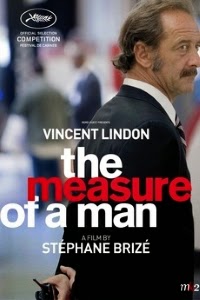 A drama about a dignified man struggling to make ends meet minus the usual tragedy, histrionics and melodrama, Stéphane Brizé’s The Measure of a Man (La Loi du Marché, 2015) provides an insight into the life of a working-class guy at the sharp end of the economic crisis. Made redundant from his job in the factory, Thierry (Vincent Lindon) has just come back from a course teaching him to operate a crane, only to find no one will give him a job if he doesn’t already have on site experience. He calmly expresses his complaint at the job centre, criticising them for not telling the other attenders of the course that it would be effectively useless for them.

The scene plays out in full with the job advisor understanding Thierry’s point of view and unable to do much but commiserate even as he offers him another course, this time to be a warehouse clerk. The scene effectively nails the style for all that is to come in The Measure of a Man. The more political translation is perhaps not so apt. In a scene with his former colleagues, Thierry renounces the opportunity to take his former employers to court. “I want to draw a line and move on,” he says, and so it is with the film. This is not an angry political denunciation and there are no agitprop scenes of revolt or camaraderie, but rather a quiet portrait of a man with his own sense of dignity, which, despite his situation, he is never going to sacrifice.

Thierry has a happy family life with his wife Katherine (Karine de Mirbeck) and teenage son Mathieu (Matthieu Schaller). His son has a development disability but is bright and funny and wants to go off to college. Thierry goes to dance class with his wife. He doesn’t have an alcohol problem, or a gambling problem, he isn’t depressed or suicidal, doesn’t turn to a life of crime, or have an affair. Rather he tries to sell the caravan to make up the short fall, but after a long scene of bargaining decides not to when he feels the price is too low. This is a man with his head screwed on and the film never contrives to put him in a spiral of bad luck. His car breaks down so he pops to the bank, organises a lone with the sympathetic bank manager and buys another one. Having finally landed a job as a store detective in a large supermarket, Thierry is conscientious and eager to learn. He doesn’t abuse his power and he increasingly feels uncomfortable as the thieves are revealed to mostly be people like him, struggling to get by in a world which is increasingly stacked against them. The store cameras search out people and watch them unpityingly in their evasions and petty thefts. An extra layer of dehumanising surveillance is applied to the actual employees – the manager is looking to fire some people, so Thierry is tasked to keep a particular eye on the cashiers.

Brizé’s film is obviously grounded in the social realism cinema of the Dardennes and our own Ken Loach. Eschewing any melodrama, The Measure of a Man is itself measured, almost puritanically restrained and anti-dramatic. Conversation entire are recorded and non-professional actors complement Lindon’s own naturalism – for contrast see him in Claire Denis’ Bastards (2013), which showed in Cannes a couple of years ago. Brizé allows scenes to play out in full: a Skype job interview and a job centre training session are drawn out as Thierry must undergo the indignity of being criticised for everything from the presentation of his CV to his posture and way of speaking – “limp” comments a fellow job seeker. Some of these scenes could have been helpfully shortened and there is almost a masochism in allowing them to unfold at a real time pace. However, The Measure of a Man is solid social document that offers insight into quiet lives lived by those who don’t give in – despite every good reason – to desperation.