“Polish films are… boring…” claims Engineer Mamon in Marek Piwowski’s The Cruise (1970), widely considered the country’s original ‘cult’ film. A tongue-in-cheek microcosm of the Communist state in which it was produced, it sits perfectly within the third volume of Second Run’s excellent Polish Cinema Classics series alongside Krzysztof Zanussi’s Camouflage (1977) and Wojciech Marczewski’s Shivers (1981). Both of the latter filmmakers were featured in Volume 2 of the series and whilst neither film here quite matches the defining masterworks produced previously, this is another impressive triptych that proves Mamon wrong and showcases three distinct approaches to challenging the social order. 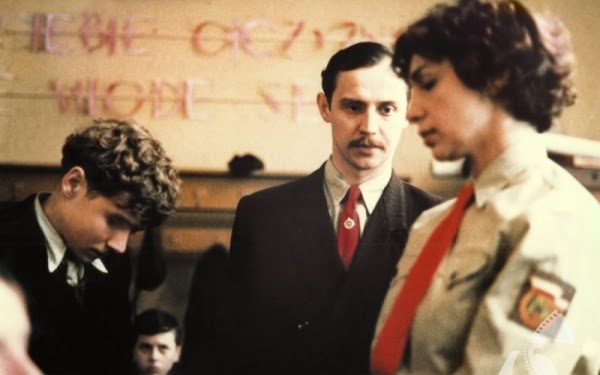 For Marczewski it was a case of channeling his own experiences at a scout camp during the 1950s into a fictional narrative that beautifully intertwines typical constituent details of a coming-of-age drama with the ideological indoctrination rife during the Stalinist period. There are political statements made – notably in the portrayal of the party’s positioning as a usurping faith – but this primarily a personal journey. Youthful rebellion, peer conformity, and burgeoning sexual curiosity all contribute to the slow psychological transformation of the thirteen-year-old Tomek (Tomasz Hudziec). Marczewski sought to recreate the scariest period of his life; verdant glass viewed through a pane of glass appears almost luminous in comparison to the homogeneous palette of the camp – the result is a deeply unsettling and upsetting atmosphere of lasting mental damage.

A summer spent in a very different kind of camp is the focus of Zanussi’s Camouflage, which charts an ongoing discourse between two academics at a linguistics retreat. The cynical veteran, Jakub (the wonderful Zbigniew Zapasiewicz), is attempting to leech the positivity and ideology out of the post-doc, Jaroslaw (Piotr Garlicki). The labyrinthine arguments are largely for Jakub’s amusement, but broach an array of political and theoretical themes. Zanussi held degrees in both philosophy and physics and his dextrous combining of the two is present here as it was in his crowning masterpiece, Illumination (1973), using conversation about information theory and evolutionary biology to pass pointed comment on the academic establishment.

Where Zanussi’s camp represented Poland as a whole, for Marek Piwowski it is a single ship aboard which a delightful cross-section of society is marooned. Like a country drifting with the current and without control, the bored passengers kowtow to the man introduced as cultural ambassador – this is actually a case of mistaken identity, he is a stowaway – and defer to pompous academics and artists. Whilst the nuanced wordplay largely – though not entirely – flies over the head of the typical viewer reading subtitles, there’s plenty of fun to be had both with beautifully orchestrated slapstick and japes at the expense of the collective populace. Back in Shivers, a lecturer, recalling life before literary censorship, proclaims to the students that “each of you, alone, imprisoned by thought and faith, may overthrow and raise thrones.” In these three films is a snapshot into the artistic attempts to explore that potential during Poland’s Communist regime.