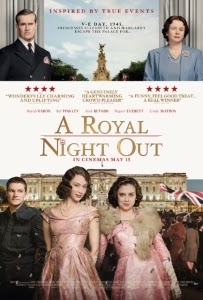 Though its genesis is based in large part on the commemoration of the 70th anniversary of VE Day, the arrival of A Royal Night Out (2015) has been granted an even higher level of prescience now that Princess Charlotte has been introduced to the royal fold. Directed by Julian Jarrold, whose previous forays into period storytelling include Becoming Jane (2007) and the stodgy Evelyn Waugh adaptation Brideshead Revisited (2008), his latest is an innocuous and overly frothy trifle that heavily coasts on a universal adoration for the monarchy, and little else. Acting as something of an unofficial bookend to 2010’s The King’s Speech, A Royal Night Out is set on the momentous night of 8 May, 1945. 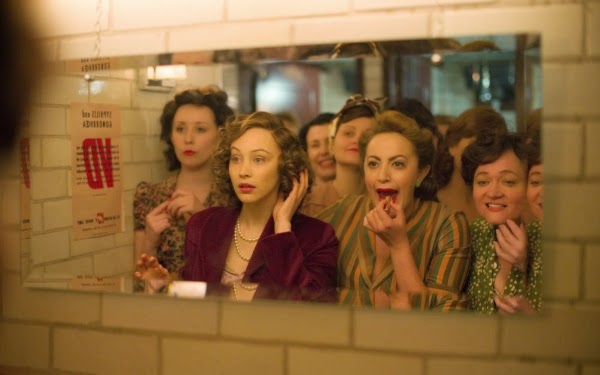 Stifled by their parents’ insistent coddling and the daily expectations of their vaunted positions, Princesses Elizabeth (David Cronenberg regular Sarah Gadon) and Margaret’s (Bel Powley, The Diary of a Teenage Girl) determination to transcend the walls of Buckingham Palace sees them joining the revellers outside for a night of clandestine partying. Taking part in the biggest outdoor party London perhaps has ever seen, starting at a lively Trafalgar Square and slowly moving to the Curzon nightclub in Mayfair and further into the night, the two inexperienced young women find that the city’s giddy mix of excitement and danger just might be more than they bargained for.

Sculpted so as to mime the gentle dramatics of a typical episode of Downton Abbey, this collaboration between first-time screenwriter Trevor De Silva and Kevin Hood presents the historic celebration as just that, a giddy jaunt with undemanding joie de vivre in spades. As two young women figuratively pinned down by the rules and regulations of a higher power beyond their grasp, releasing their inhibitions on the streets of London is the perfect opportunity for them to cast off the shackles and formally come of age. This highlights the fundamental imbalance between the two leads: Elizabeth – granted a certain amount of identifiable reticence by the Canadian Gadon – is the stiffer yin to Margaret’s yang, who’s portrayed by Powley as nothing more than an insufferable ditz who just wants to dance. Battling through the predictable script with estimable, though mostly groan-inducingly clipped English, the film’s cast (including Emily Watson and Rupert Everett as Queen Elizabeth and King George) are lumbered with plot machination after plot machination, which set out to keep Elizabeth and Margaret apart in fictionalised ways that push the boundaries of plausibility.

Drafted in to serve as a romantic foil is Irish actor Jack Reynor’s jaded soldier Jack, whose distaste for the monarchy is at odds with his altruistic saviour complex. Unlike his powerful recent performances in Glassland (2014) and What Richard Did (2012), Reynor is lost here in the blandness of his thinly-etched character, struggling to both sustain the accent and bring to life what is a essentially an excuse to complicate an overly straightforward plot. Perfect fodder, perhaps, for a Sunday night TV special, A Royal Night Out certainly looks the part, bathed in an opulent glow thanks to DoP Christophe Beaucarne and the production design, though its bland wish-fulfilment narrative is sanded down to the point of triviality.