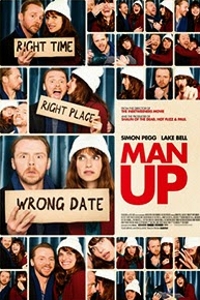 A forcedly feel-good British rom-com starring the quirkily charming Lake Bell and frenetic Simon Pegg as its screwball couple, Man Up (2015) falls surprisingly flat. Even the strained efforts of its talented lead actors fail to redeem the pitfalls of a woefully cheesy, unoriginal script and a wasted premise of mistaken identity on a first blind date. But if smugly stereotypical characters, cheap fellatio jokes, and Bridget Jonesy New Year’s resolutions – “Put yourself out there, take chances, engage with life, get stronger thighs” – are your thing, you might enjoy this film. With her iconically toothy grin, unlucky-in-love Nancy (Bell) tricks the recently-scorned Jack (Pegg) into thinking he’s met his internet-delivered mate. 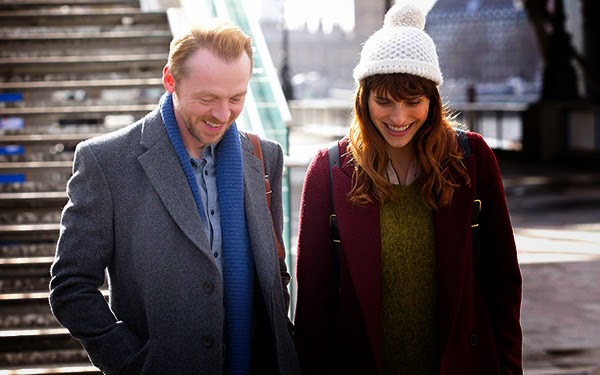 The quips and sparring sass fly fast between them over booze, fave lists, and Silence of the Lambs quotes that don’t quite qualify as clever. Bogged down by a clumsy chase scene through Soho and other limp slapstick devices, the plot relies too heavily on coincidence and contrived situations. Also needlessly complicating matters are too many side characters, like Nancy’s older sister, who obsessively calls to pressure her into finding a boyfriend, and a slobbering ex-schoolmate who creepily attempts to blackmail Nancy for sexual favours. Interludes of Nancy monologuing in front of bathroom mirrors about being a loser don’t help. Luckily, her gnawing insecurity is nothing a little make-up and an overtight halter top can’t seem to fix. Perhaps because of Jack’s horrified reaction when she reveals that she’s not the pert package of a 24-year-old triathelete that he expects, Nancy immediately switches from defensive date to overprotective buddy when they run into his ex-wife.

Only too eager to obey his challenge to “Man up,” she impersonates – this time, with Jack’s full approval – an oversexed mistress that he can flaunt in his unfaithful former partner’s face: the threat of gender war is smoothly diverted by vengefully pitting a younger woman against an older woman. Justifying Jack’s manipulative attempt at ‘closure’, Nancy consoles him with pat titbits from New Age self-help books. “Start at the corners,” she says, “and look for the blue bits.” The whole drive of Man Up seems to suggest that being single is nothing less than a travesty. Its choice to start at a Hawaiian luau-themed engagement party and end with a 40th anniversary party for Nancy’s stiflingly cheerful parents heavy-handedly underscores her dependence on marriage and male approval for self- validation. For all its superficial flirt with sexual politics, the film’s traditionally conservative view of a happily coupled-off society inevitably evokes the atmosphere of Jane Austen novels, minus the self-ironic wit. Its not only a straightforwardly nostalgic vindication of bourgeois values and institutions, but a facile wish-fulfilment fantasy for desperate thirtysomethings. Despite a fun 80s dance-off and gratuitous bum-wiggling in a bowling alley, Man Up refuses to take its own humour seriously.