The cinematic spectre of the terrifying hoodie rears its head once again in Simon Blake’s debut feature, Still (2014), which is in cinemas now. At its centre is a startling performance filled with conflict and nuance from the ever-excellent Aidan Gillen (best known for television’s Game of Thrones), but it’s the tug-of-war between atmospheric character drama and grim, outlandish thriller that dominates proceedings. On one hand Still is a moving and upsetting portrait of paternal grief; on the other is a battle with the foot soldiers of Broken Britain, who wage savage war for imagined slights on the streets of London. Admittedly, this is far from the nightmarish underpasses of something like Harry Brown (2009). 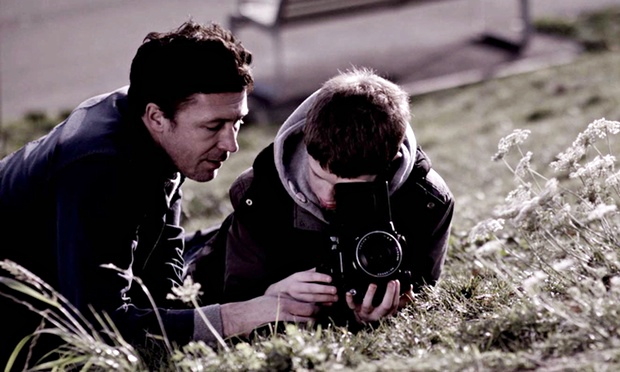 The shadows remain the sanctuary of demonic gangs, though, that rape and murder to pass the time. Gillen’s Tom is a photographer who inhabits this noirish cityscape which is completed by a mournful jazz score. Since long before the death of his teenage son in a hit-and-run a year before the film opens, he’s been a Gordian knot of self-pity and contempt. Grief has only exacerbated those problems. Estranged from the boy’s mother, he has a beautiful girlfriend and seems to make enough money to get by, but lives in something approaching squalor – often half-baked or half-cut. Gillen imbues him with an easy charisma when the role calls for it, but scratch at the surface, Tom claims, and there’s nothing underneath but darkness – though a crackling energy hints at anything but inertia.

The destructive nature of that hollowed heart proves the link between Tom and the youths that begin to torment him after a misunderstanding on the street; the black is encroaching from without and within. Third act revelations might poignantly reveal how much closer the protagonist and the antagonists really are than we’d like to believe, but before that, the narrative struggles to balance soulful character study with hoodie horror. Gillen wrings every inch of pain from Tom’s suffering – whether it’s evidenced in a drug-fuelled stupor or the perfectly judged grimace. Amanda Mealing and Elodie Young both provide equally impressive support as Tom’s ex-wife and current squeeze respectively, with the latter given the heavier lifting in a scene that could easily have careered into the overwrought.

Still isn’t without those kinds of moments, though, and while the pitch swings from inaudible subtlety to melodrama, the malcontents run amok. When Tom questions at one point why he’s being targeted, the retort is ‘why not’. However, while the intimate portrayal of Tom’s grief seeks to explore the contradictions of his psychology, the social commentary feels disproportionately simplistic. Inherent corruption and bad parenting paint too broad a picture. In one scene, Tom and his friend Ed (Jonathan Slinger) discuss the hope that children exude, but not enough is done to elucidate how that has been so irrevocably lost. This lack of complexity hampers much of what Still does well.