There’s much to be said for genre films that strip things back to their fundamental elements and hit the ground running, shorn of all contrivances and elaborate special effects. Whilst much is going on in Toa Fraser’s The Dead Lands (2014), it is primarily a lean and undeniably brutal actioner that claims to be the first film to truly showcase Maori martial arts. This is the case to a certain extent; it forefronts bone-crunching combat as it follows a young warrior through dangerous territory. Though it can feel a little one-note as times, spectacular landscapes and a drop of mysticism elevate this slick tribal thriller that calls to mind Mel Gibson’s heart-pounding Apocalypto (2006). 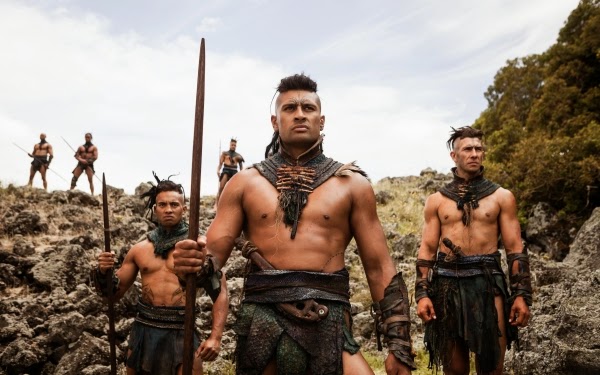 As with Apocalypto our hero here is a young man racing through perilous jungles. Those perils are illustrated in a pre-titles sequence in which a man is savagely slain while darting between towering trunks. It is later revealed that he was hunting in the eponymous ‘Dead Lands’, where a tribe one day vanished and a flesh-eating spirit has wandered ever since. This is the exact route that Hongi (James Rolleston) must take as he tracks a band of enemies who slaughtered his entire tribe in bloodlust. “War feeds our glory,” or so says their arrogant leader Wirepa (Te Kohe Tuhaka), but Hongi’s honour can only come from avenging his people. Such themes of glory and lineage are central in this discourse on masculinity and remembrance. Hongi’s journey to prove himself a warrior is the heart of this drama. In a move that neatly aligns with Joseph Campbell’s monomyth, Hongi crosses the threshold and enlists the help of a supernatural aid, the very flesh-eating warrior (Lawrence Makoare) that haunts the forest.

He is the pinnacle of ferocious masculinity in The Dead Lands – even more than the actual villains – commanding multiple wives and slaughtering foes with a single blow. The assessment of whether strength or agility might be key to power is raised throughout the action as Hongi battles to ‘become a man’ as well as questions about the nobility of death and murder. Both Hongi and the spectral warrior are subject to the judgement of their ancestors in the film’s more supernatural moments which include a brood of witches, a visit from a long-dead grandmother and hallucinatory commune with the spirits. These are all interesting asides from the core action. Their negotiation of the stunning New Zealand landscape is visually glorious as one may expect, though cinematographer Leon Narbey steeps the screen in ominous shadows, even in the bright sunlight the forest canopy does its work. Though breakneck editing of the super close-up fight sequences can mean that the choreography is lost at times, it retains a blistering kinetic energy and every crunched bone is felt. The bruises and path may be familiar, but The Dead Lands does enough to seem fresh and grips throughout.