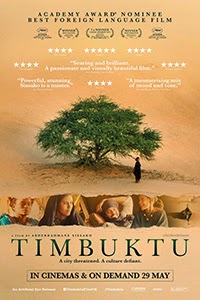 “Tire it, don’t kill it,” shouts a hunter to his party as they pursue a gazelle across the desert plain in a jeep. The men let off sporadic shots with the assault rifles they will later use to rip apart the sculptures and effigies that represent a culture their new Islamic regime is trying to suppress. Abderrahmane Sissako’s Timbuktu (2014) – getting a release after premièring at last year’s Cannes – is a beautiful drama fuelled by a sense of urgent and righteous anger. But there’s sadness here as well as hope. Kidane (Ibrahim Ahmed) lives with his wife, Satima (Toulou Kiki), and their daughter, Toya (Layle Walet Mohamed), in the desert near a town which has been taken over by the Islamic police.

Kidane leads an idyllic existence, tending to his cattle, playing his guitar and chatting with his family, largely free from interference from the strict rules the foreign jihadists have imposed on the villagers and surrounding countryside. However, when a local fisherman offs one of his cattle and, in the ensuing dispute, is accidentally killed by Kidane, the family man is seized and his fate lies in the hands of the arbitrary zealots of a fundamentalist faith. Inspired by the stoning of an unmarried couple in 2012, Sissako seems determined not to strike directly at the enemy but to instead slowly reveal the absurdities and contradictions in their own thinking. Rather than a fundamental return to source, militant Islam is shown as an interpolation and a break with tradition; a modern phenomenon and a foreign invasion.

The militia ban music, laughter and even just hanging around; women must not only be veiled but also wear socks and gloves, and football is disallowed. The absurdity of their proscriptions and their own confusion and haphazard way of applying them (“They’re singing praise to God, what should we do?”) would be comic if it wasn’t for the murderous zeal that underwrites the madness. An elderly imam remonstrates with the newcomers, offering a more tolerant meditative homegrown version of Islam. A feisty woman selling fish refuses to yield to their demands and a crazy woman with a chicken confounds them with her Holy Fool honesty. But as their grip on the village tightens so the resistance becomes more desperate even as it threatens to vanish. In a gloriously imagined scene, a group of boys play a game of make believe football with an invisible ball, as football has been banned.

However, it’s Kidane – as a man who loves his women and does not seek to control them – who stands at the heart of the film, a compassionate man whose love for his family and sorrow for what he has done stand in helpless opposition to their bullying and inhuman absolutism. Sissako’s film is at turns funny, poetic and deeply moving. His use of the landscape and the light of the desert are stunning – one long shot of an incident at the lake has a breathtaking gorgeousness even as the plot takes a tragic turn. In addition, the performances are uniformly strong. Sissako’s Timbuktu is a film with its heart in the right place but also a sharp and perceptive dissection of the violent folly of extremism.

This review was originally published as part of our coverage of the 2014 Cannes Film Festival.