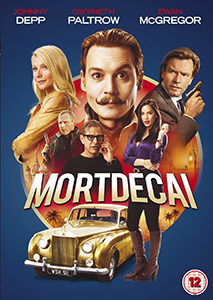 Johnny Depp continues his descent into self-parody with the mawkish and turgid caper Mortdecai (2015) from director David Koepp. Based on Kyril Bonfiglioli’s 1970’s comic novels, it follows the misadventures of the dodgy art dealer Charlie Mortdecai. He is a buffoonish British aristocrat who gives dear Johnny plenty of scope to up-the-ante on his long list of insufferably tiresome character performances. Like the Mad Hatter, Jack Sparrow and Willy Wonka before, he seems all too at home with the eccentricities of the role; complete with plummy British accent, twittering facial whiskers, and nods to the films Peter Sellers, Ronald Neame’s Gambit (1966) and its 2012 remake. 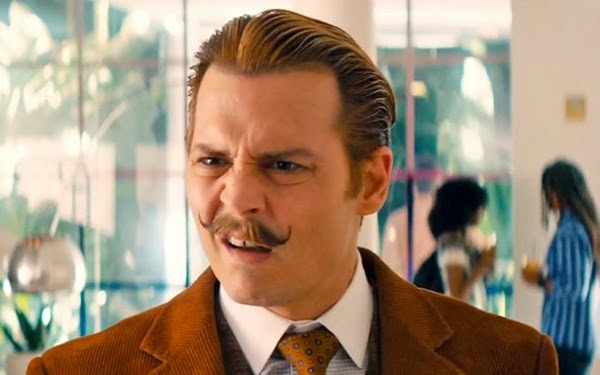 The world presented feels far closer to that of the 60s – slap and tickle jokes and all. This makes the entire proceeding feel anachronistic, even a little Carry On. Depp merrily swans about the great halls of Mortdecai Manor in his smoking jacket trying to bed his Sloane-ranger wife, Johanna (Gwyneth Paltrow, dealt a complete dud of a role with little she can do to rectify the situation). She oddly appears to be far more peeved at Charlie for growing a moustache than steering them towards financial ruin. Being in the red financially means that Charlie needs a plan. Fortunately, his old pal Martland (Ewan McGregor) offers him a job trying to recover a stolen Goya painting.

Charlie sets out to investigate along with his over-sexed manservant (not a euphemism) Jock Strap (Paul Bettany – and yes, that is a dull-witted euphemism). Depp was purportedly very fond of the source material, and the gusto of his performance demonstrates his passion, but there is a big problem. Mortdecai is not a very interesting character. His clumsiness with firearms, his narcissism, his sex drive, all make for a dirty uncle character that becomes increasingly unattractive to watch. Unlike P.G. Wodehouse’s buffoonish Bertie Wooster, who possessed a naïve charm and upper-class silliness, Mortdecai comes across as little more than a petulant toff.

On paper, the concept of a modern-day caper sounds like it might offer a few laughs, and there are a few, but not nearly enough. The plot is messy, and concerns Depp darting around the globe, finding himself in ever increasingly surreal situations. There are a couple notable cameos that provide a few titters, in particular, Paul Whitehouse as a crooked car mechanic, and Jeff Goldblum as Mortdecai’s art-world rival, Krampf. However, the dire script washes out any of the passable performances. In truth, Koepp’s latest feels like a strange, desperately outdated amalgam of On the Buses by way of spy series The Avengers.