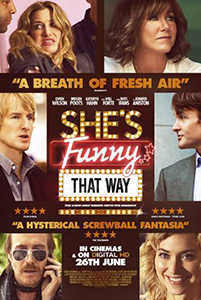 Watching Peter Bogdanovich’s She’s Funny That Way (2014) is a somewhat bittersweet experience. It’s terrific to see the great almost man return from TV movie purgatory with renewed focus to craft a lovely, quick-witted throwback with big stars on a broad canvass. But, on the other hand, one is acutely aware that the these kinds of classical Hollywood revivals by returning New Hollywood greats never make the impact they should. And the stinger is that it’s not quite good enough a proposition to rally the strident auteurists to its defence like, for example, Polanski’s Venus in Fur (2013) or Schrader’s The Canyons (2013). It will likely be another false start for the director who has long deserved better. 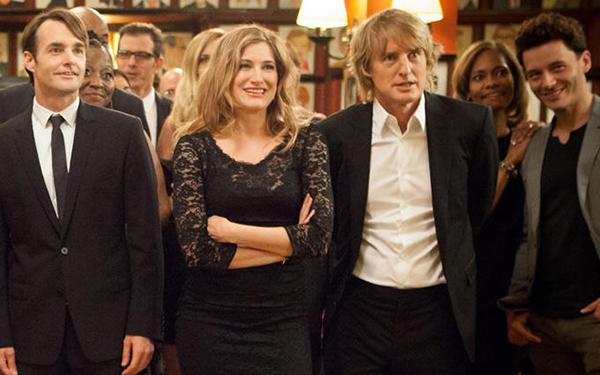 With its playful, theatrical plot, She’s Funny That Way aims for Ernst Lubitsch but lands at late period Woody Allen. Not that there’s anything wrong with that; it moves at a sprightly pace, trading in the firecracking witticisms and exaggerated Manhattan archetypes that are the stock-in-trade of the latter director’s best work of the 2000s. It similarly has Allen’s penchant for a Pygmalion story; it shares the same cinematic DNA as Small Time Crooks (2000) or Whatever Works (2009). The starry cast – with Owen Wilson, Jennifer Aniston and many more besides – is a boon, bringing some comic thesp heft to bear on the material, and playing nicely off the adroit turns in the supporting ranks from great TV comedians. As usual, Bogdanovich makes his stylistic case abundantly clear. Lubitsch’s Cluny Brown (1946) is an explicit reference point and, while the director falls short of this dauntingly high watermark, it does provide the picture with some direction; guiding its arch contrivances and serving as a litmus test for its Old Hollywood romanticism.

Its plot is built on coincidence, which, though perhaps a touch rarefied for modern tastes, ascribes some structural integrity to the madcap proceedings. Bogdanovich is clearly in his element, even dashing off some excellent post-modern flourishes, one of which recalls the terrific Rawhide moment in Clint Eastwood’s underrated Jersey Boys (2014). It is the first Bogdanovich film on this scale for many years, certainly since Noises Off (1992). This was achieved through funding provided by celebrity fans Wes Anderson and Noah Baumbach. An act of generosity that pays off artistically but equally serves to highlight the fact that the great auteurs are not a force in the industry anymore, studio or indie. It’s a disheartening realisation, especially when we see the great work they are still capable of, like Coppola’s Twixt (2011) or Friedkin’s Killer Joe (2011). While we do have our great, younger directors working today, it’s hard to let go of the revolution of New Hollywood. If only audiences felt the same.