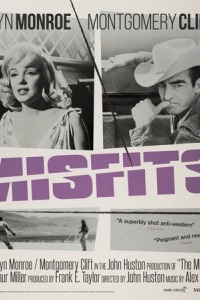 During the powerful final sequence of John Huston’s The Misfits (1961), there is a moment that cuts through the fog of the film‘s legend and rips straight through the heart. Marilyn Monroe is standing in a barren expanse of land in which horses are being rounded-up. As a thrashing horse is pulled violently to the ground, she doubles over and lets out a piercing scream. It’s a long shot, with the use of deep focus ingratiating her into the landscape; just another lonely figure howling into the abyss. It’s a picture so precariously balanced on the edge of poetry and sentiment, of defiance and self-pity. 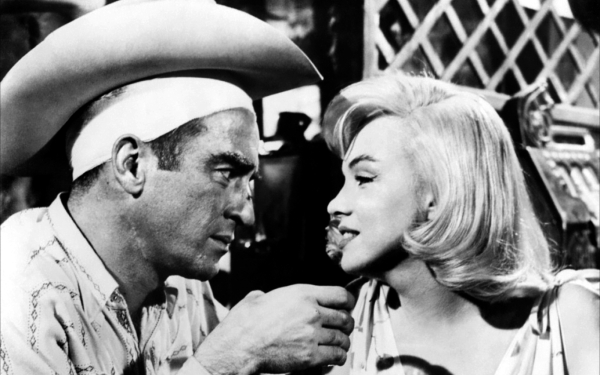 It’s self-conscious in its solemn commemoration of an era coming to a close, but helpless to stem the powerful current of personal loss underscoring its elegiac metre. Even in 1961, it was a conscious epitaph for the great Hollywood studio era that had just come to an end. Arthur Miller’s screenplay treats yesterday’s heroes (cowboys, starlets, barflies) as today’s outcasts. The Nevada town is a scrapheap for lives lived for moments; lives at the mercy of the great tides of romance and personal freedom. Its stature increased when it transpired that the film would become the final (or near final in the case of Montgomery Clift) picture in which its trio of stars would appear. Its merits and significance have been exhaustively documented over the years, but The Misfits still has a lot to show us about how we should approach Hollywood today.

In an age where hundreds of pictures are released each year, it’s easy to get mired in a never-ending thirst for the film that’s just around the corner. We should remember that the story of Hollywood is one of cyclical patterns based on the constantly shifting line between art and commerce. It is a history of artists fighting business, and the great works are born of this unique tension. The Misfits is thusly a film struggling to come to terms with the personal toll of the studio era. Its stars were iconic ideals dragged to earth by mortality (Clark Gable), disfigurement (Clift) and metal illness (Monroe). Its pathos is derived from the audience’s collective memory of its stars’ heyday; early performances are embalmed in celluloid – like the picture in Dorian Gray’s attic – and the dichotomy increases year on year.

Huston and Miller knew that audiences would see Clift slumped on the bar in The Misfits and remember the gorgeous kid hitchhiking to town at the beginning of A Place in the Sun (1951); it‘s the vision of stardom’s pound of flesh. The notion becomes even more potent with Monroe. Marilyn was an idea conceived by several patriarchal forces; but you could see Norma Jean in every moment of her screen time; the sad, abused, ambitious woman struggling to negotiate the compromises of Hollywood – a battle between body and soul. We will never understand her furtive complexities, and that’s why we keep trying. She is the key to understanding so much of the context of the American cinema. When we write about Hollywood, we wrestle with supernovas; we can only catch the debris of their magnificence.