DVD Review: ‘The Boy Next Door’ 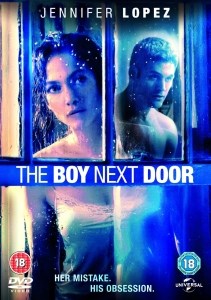 The inclusion and modern interpretation of literary classics like Homer’s The Iliad and tales of Oedipus the King juxtaposed with the detrimental dialogue present throughout the entire film is just one of many reasons as to why Rob Cohen’s The Boy Next Door (2015) will be remembered as one of the worst movies of the year. The sub-par acting, overdramatic cinematography and horribly predictable shock value of the film makes it all the more difficult to sit through without laughing at the ludicrous production or checking a cellphone to gauge how much torture one is expected to sit through before it finally ends. Worst of all, however, is the warped desire to sexualise the misogynistic actions of the lead sociopath.

Within the first five minutes of The Boy Next Door it’s blatantly obvious this isn’t going to be an award-winning production. Jennifer Lopez’s Claire Peterson, an insanely attractive high school teacher who’s recently separated from her cheating husband Garrett (John Corbett) is avidly trying to normalise and restructure life for her teenage son Kevin (Ian Nelson). Enter Noah Sandborn (Ryan Guzman), the attractive 20-year-old nephew of her elderly neighbour. Using clichéd close-ups of Lopez’s thighs, toned stomach and cleavage and close-ups of Guzman’s arms, stomach and chiselled jaw, the director manages to hammer his reductive point across. A couple glasses of red wine a few weeks down the road, and Noah finally convinces Claire to spend a night abundant in orgasms in his bed.

While the inevitable sex scene is supposed to be incredibly sensual, the lusciousness of the scenario loses all credibility when Noah unashamedly ignores Claire’s desperate cries of protest, begging him to stop. It’s hard to make a lovemaking scene seem poetic when the prelude to the entire act is founded on a heinous crime. The message of the scene is simple: mark your territory on a woman long enough and she will eventually succumb to your every desire. It’s a repulsive and degrading scene and, worst of all, it doesn’t end there. It becomes evident to Claire that Noah isn’t the sweetheart who befriended her lonely son. He’s quite the opposite; a psychopath in every sense of the word. He eventually gets violent and Claire is left hiding their terrible secret and wondering what to do. Cohen’s The Boy Next Door is supposed to be an erotic thriller yet advocates the idea of violence against women and, seemingly without any remorse, hyper-sexualises the concept of domestic abuse. It’s a preposterous film, a complete and total failure on all accounts, and would be best used as a future exemplar of how not to make a movie.

This review was originally published to coincide with the film’s UK theatrical release in February 2015.