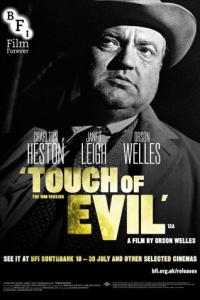 Touch of Evil (1958) proceeds with one of the most celebrated long-takes in screen history. The sequence is a marvel of technical virtuosity and staged action. From the very start, Orson Welles’s grubby and sweaty noir classic has us in its grip with a gloriously devised piece of showmanship emblematic of the director’s audaciously talented spirit. What’s rarely mentioned, however, is the second, albeit shorter, uninterrupted take. It’s a smart contrapuntal note, in relation to the famous tracking-cum-crane shot. If the opener is a slick bit of business, the second use of the long take is intentionally rougher. 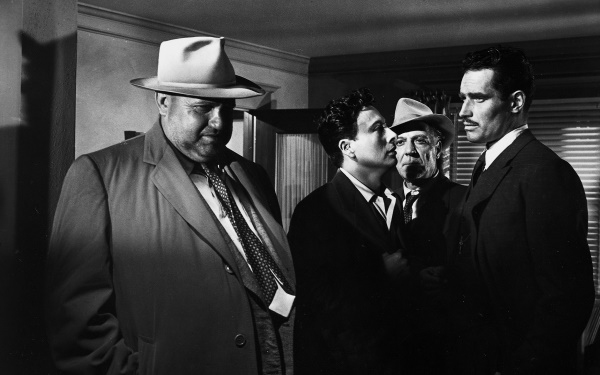 It marries the two prevailing forms that dominate the picture: the polished and the down and dirty. The low-angled dolly shot follows Mike Vargas (Charlton Heston), a cop as honest as the day is long, as he rushes towards the scene of an explosion. The camera shakes and wobbles across the uneven surface of the street. People run in and out of frame. It’s as quietly impressive as the opening shot is grandiose. In 1998 American editor and sound engineer, Walter Murch, re-edited the picture and removed screen credits from disturbing the view. Henry Mancini’s score was also replaced by a sound montage of popular music and bits of street noise that drifts in and out of earshot in a matter of split-seconds. Murch wasn’t radically altering the text for his own kicks, though. This was how Welles had always intended Touch of Evil to be, had Universal not booted the filmmaker out of the cutting room.

Murch worked from the late director’s famous twenty-page memo, that detailed all that was wrong with Universal’s version and how it could be put right, and followed it to a T. Judging them side by side, Touch of Evil (1958) and Touch of Evil (1998) is the difference between a cult gem and a masterpiece. From routine potboiler material and a studio gig that would prove to be his last (as well as his final American picture), Welles turned Hank Quinlan and his fall from grace into a Shakespearean tragedy. The sting in the tail is that the big guy, right all along about the boy he then needlessly stitched up, sets in motion his demise. “He was a great detective, but a lousy cop,” Marlene Dietrich’s gypsy, Tana, famously puts it at the end.

With his maverick ways and disregard for the rulebook and the rule of law, is Hank not the patron saint of all those beloved loose cannons seen in 1970s and 1980s action movies? It’s worth a thought. Captain Quinlan is definitely one of film noir’s preeminent slimeballs, and one of its tragic figures. Hank always gets the right man, but his methods are unsound. He refers to planting evidence as “Aiding justice.” In reply to the question, “How many did you frame?” Big Hank fires back: “Nobody that wasn’t guilty.” Somewhat perversely, it’s all true. Touch of Evil is one of Orson Welles’s greatest achievements on film, even if it took forty years to see the light of day. Do not miss it.