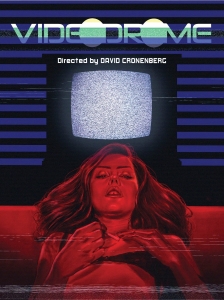 David Cronenberg’s Videodrome (1983), on Blu-ray this week through Arrow Video, sees the Canadian auteur at the peak of his pre- Hollywood career, angling subversive body horror into broader political and social commentary. The film starts of with the tone and feel of a paranoid thriller. In a brilliantly intense performance, James Woods plays Max Renn, the owner of Channel 38, a small TV station that offers its viewers a mixture of “soft-core pornography and hardcore violence”. Renn meets with shady Japanese businessmen in rundown motels to haggle for ‘Samurai Dreams’, a low budget Empire of the Senses. 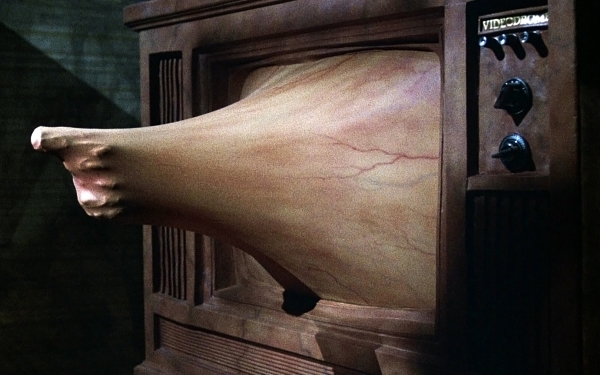 Renn doesn’t care much for modern culture or society, a point which becomes all too obvious when he’s asked onto a talk show to justify his business and instead gets distracted by a fellow guest’s red dress (mind you, the guest Dr. Nikki Brand is played by Blondie frontwoman Debbie Harry). Renn picks up from his pirate engineer the transmissions from a channel called ‘Videodrome’, which appears to show disturbingly realistic scenes of sexual violence, torture and murder. Spellbound by the content, Renn seeks to track down the source of the transmissions even as he begins to suffer hallucinations that blends his life with the programmes he keeps seeing.

A relationship initiated with Nikki reveals her to be sadomasochist who also gets hooked to the show – “I was born to appear on this show”. The other guest on the talk show alongside Renn and Nikki is the Marshall McLuhan like media critic Brian O’Blivion (Jack Creley), who will only agree to appear on television if he’s on television. He acts as a chorus, citing many of the ideas of the film explicitly, particularly the permeability of the interface between the body and technology and the integration of identity with the media. “Brian O’Blivion is not my real name, it’s my TV name. Some day we will all have TV names,” he predicts. It’s astonishing how prescient Cronenberg’s commentary is, with omnipresent talking heads, Twitter handles and the Egyptian air force announcing air-strikes on its Facebook page, the wildest postmodern fantasy has become our everyday accepted reality. But Cronenberg’s film is no angry polemic a là Network (1976). He sees too much attraction in the cultural miasma to come to condemn it and the film slides into Renn’s hallucinations as he sticks his face into the soft mouth of the television screen and grows a vagina on his stomach to receive new pulsating cassettes.

For Cronenberg, opposition to the powers that be and their cancerous murderous entertainments comes in the form of another cassette and another series of hallucinations – “Long live the new flesh” – with no real validity either. And no reality for that matter. It isn’t only O’Blivion who has a name plucked from a Thomas Pynchon novel – Barry Convex, Nikki Brand all sound fictional. With a throbbing electronic score by Howard Shore, Videodrome is almost the quintessential midnight movie. Ideally, you’d catch it between stations on a channel you’ve never heard of before. This new release comes with an extra disc featuring Cronenberg’s early work, including the features Stereo (1969) and Crimes of the Future (1970). It’s a timely reminder of what an original and wittily inventive the young Cronenberg was, especially in view of his more recent transformation into an overly respectful adaptor of visions less interesting than his own.