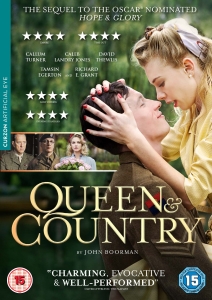 Queen & Country (2014), which screened in the Director’s Fortnight sidebar at Cannes last year, is the second part of John Boorman’s filmic memoir, following on directly from his 1987 Best Picture Oscar nominee Hope & Glory. It’s 1952: ten years on since the Nazis dropped a bomb on a school causing the kids to celebrate in the streets – “Thank you, Adolf” – but post-War Britain is a place of stiff tradition, austerity and, worse still, National Service. The War might be over, but war in Korea means there is no escaping the military and Bill Rohan (a charismatic Callum Turner) is called up away from his idyllic island on the Thames and family life to go through basic training. 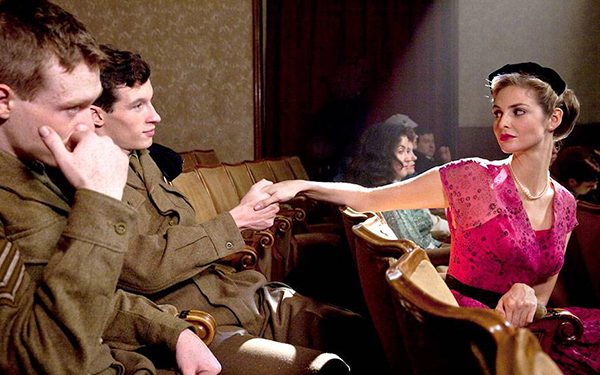 In the boot camp he is relatively lucky not to get shipped off to the conflict, but instead is promoted to sergeant and given the task of teaching new recruits to read, write and type. Here he is assisted by his eccentric friend Percy (Caleb Landry Jones), who can’t quite decide on the accent and gives an outlandishly over the top performance to compensate. The two junior instructors are under the thumb of a petty by the book Sergeant Major Bradley (David Thewlis), whose constant citing of the Army Rule Book makes him the Major Frank Burns of the piece. His petty tyranny for the most part draws only indifferent contempt from his superior Major Cross (Richard E. Grant).

When Percy’s pranks go one too far he draws the wrath of RSM Digby (Brian F. O’Byrne), a far nastier piece of work. While all this is going on Bill is locked in an aching virginal romance with an obscure object of desire who calls herself Ophelia (Tamsin Egerton), a woman with a tragic otherness about her. This all boils down to something like the gentle comedy of a warm oft retold anecdote. A benign familiarity informs proceedings. It doesn’t matter that we’ve seen the barrack room skiver, the impossible romance, the prankster and the petty officer getting his comeuppance in a hundred other films. Nor that there are the occasional anachronisms. I doubt people were told to “get over it” in the fifties and the diagnosis of Post Traumatic Stress Syndrome was not current until the late Seventies. This is John Boorman’s personal vision and the 81-year-old director who brought us Point Blank (1967) and Deliverance (1972), not to mention the inspired insanity of Zardoz (1974) and Excalibur (1981), has earned the right to have some indulgence and Bill’s growing interest in the cinema is lightly but movingly touched on. Stephen McKeon’s score adds a lyrical sadness to the movie, of a time irretrievably lost, but maybe not so irretrievably after all.