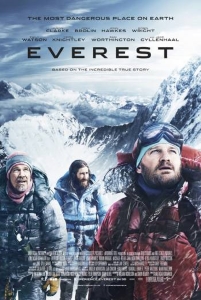 Plunging you into the mindset of a group of mountaineers tackling the highest point on Earth, Baltasar Kormákur’s Everest (2015) is a heady disaster movie based on the true-life story of a disastrous 1996 expedition that ended in the deaths of twelve professional and non-professional climbers. Pitching man against nature, we meet Rob Hall (Jason Clarke, last seen in the dire Terminator Genisys) who runs a commercial climbing company that takes intrepid types from all backgrounds up to the summit of the mountain. As he states in the film, his job is not to get you to the top of the mountain but “to get you back down” – fateful words that pre-empt the events to follow. 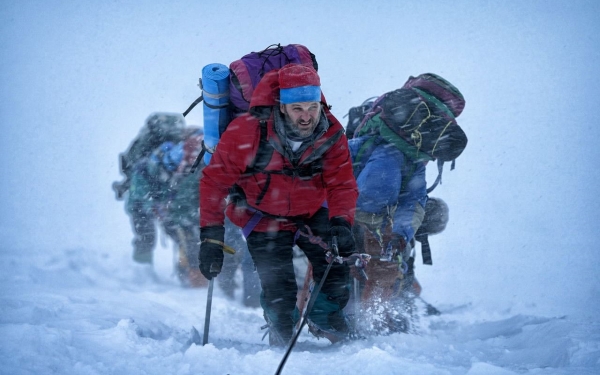 The film is loaded with suitably stunning visuals, shot on the foothills of the Himalayas, with the Italian Alps standing in for the high climbs of Everest. The script was written by Simon Beaufoy, William Nicholson and David Breashears, a veteran climber who has previous climbed Everest on several occasions and who knew many of the climbers who lost their lives, consulting on the film. The levels to which Kormákur has gone to to thrust the audience into the headspace of why climbers attempt this dangerous feat is impressive. In one scene, Jon Krakauer (Michael Kelly), a journalist for Outside Magazine, turns to his fellow climbers and asks why they would attempt such a feat.

The reasons provided range from Yasuko Namba’s (Naoko Mori) desire to reach the summit of the world’s seven tallest mountains, Doug Hansen’s (John Hawkes) dogged determination to reach the summit to inspire children at a school back home, to Beck Weathers’ (Josh Brolin) escapist desire to feel at peace with himself while he questions the state of his marriage. These quieter moments contained in wind-lashed tents are some of the finest in the movie, demonstrating the friendships formed amidst deadly conditions. Outside, the atmosphere is one of tension. We see the team navigate the deadly Hillary Step and balance on ladders across seemingly bottomless crevasses as the ice-winds whip at their faces. The moment they reach the summit is one of elation and exhaustion (both for those on-screen and for the audience), constantly accompanied by a sense of foreboding. Back down at base camp, Helen Wilton (Emily Watson) tracks a snow storm’s rapid progress towards the mountain-top. The tension is ratcheted up further by the distress felt by the men’s wives back home including Rob Hall’s pregnant wife Jan (Keira Knightley) and Peach Weathers (Robin Wright).

For the most part, Kormákur has avoided emotional manipulation of his audience. A phone call (based on an actual conversation that was had between Hall and his wife, recorded by Wilton) has a practical tone that strikes of realism yet doesn’t entirely avoid soppy territory. One problem the film does suffer from is that we have to contend with a plethora of characters and different teams scaling the mountain – including Hall’s friendly rival Scott Fischer (played to perfection by Jake Gyllenhaal) and gung-ho team. This means that we only get to know the characters at surface-level, knowing just enough to make us care and feel the peril but not enough to feel that we have truly understood the characters. Everest is a tense, visually arresting disaster movies that manages to avoid becoming an obituary piece. Kormákur has succeeded in bringing a disaster epic to the big screen – something we rarely see in cinemas these days – and has done so with gusto that will knock the air from your lungs.