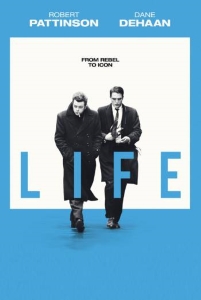 It would be a mistake to call Anton Corbijn’s Life (2015) a James Dean biopic, despite its subject matter. Far more interesting is the fact that Corbijn, a world famous photographer known for working with everyone from Bob Dylan to U2, has chosen to direct a film about photographer Dennis Stock, the man responsible for the iconic Times Square image of Dean. Life is a small but eloquently expressed drama of two men whose lives cross and how they effect each other’s futures – with one of the pair destined to become a Hollywood icon. 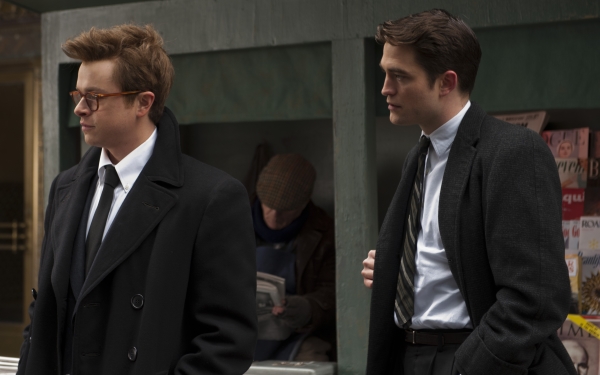 Dane DeHaan’s performance as James Dean is impressive, not least because costume designer Gersha Phillips and make-up artist Jo-Ann MacNeil have transformed the slight figure of DeHaan into an uncannily accurate image of Dean. There’s something about the way DeHaan embodies the character, with his soft, ethereal voice and narrowed eyes. You quickly forget that DeHaan is present, accepting him wholeheartedly as Dean. We meet him on the cusp of his stardom just after East of Eden (1955) and months before he would shoot Rebel Without a Cause (1955), the film that would immortalise him in pop culture down the decades.

Dean meets Stock (Robert Pattinson), an ambitious young photographer desperate to prove himself. He’s also divorced with a young son, not that either of these issues seem to affect him. Stock is shown to be driven, tired of having to hang on behind red ropes at premières, snapping stars for cheap glossies. He wants to be an artist and so offers images of Dean (which he doesn’t yet have) to Life Magazine for a profile piece. As Stock, Pattinson doesn’t share the limelight of DeHaan’s Dean but he is ever present, hawking the fledgling star from the shadows, desperate to capture Dean’s rebellious spirit. Pattinson navigates the role with pathos, no doubt in part due to his own experience of being hounded by the press following his emergence in the Twilight franchise. He convinces as a photography and in the brief moments when he has to interact with his young son he’s suitably awkward. Corbijn also brings his forty years of experience to the role, exploring the relationship between photographer and subject. Stock blurs the line between wanting Jimmy as a friend and as a subject. At one point, Dean snaps at Stock asking him who he think is helping who. In these moments Life truly shines: this isn’t a movie interested in box-ticking Dean-lore but it is instead more interested in the space between two artists.

A photography is almost vampiric, feeding off the fame of his subject. Yet it is also the images that the photography takes that will cement the star in the public consciousness. This perverse symbiosis is rich material but Corbijn keeps it all in a low key, immersing his audience in the rumbling, rebellious spirit of the time. One element that perhaps falls into the more traditional schema associated with biopics is the checking off of famous celebrities of the age: Dean dances with Eartha Kitt (Kelly McCreary) in a dive bar, hangs out with Lee Strasberg (Nicholas Rice) and is berated but an irate Jack Warner (Ben Kingsley). Corbijn has crafted a small but highly entertaining dramatic thesis on the idea of show-business and voyeurism, exploring the brief friendship between a man who had fame thrust upon him and another who would feed of that fame. All the while, Life is tinged with a sombre tone, Dean’s own death looming as the credits roll.