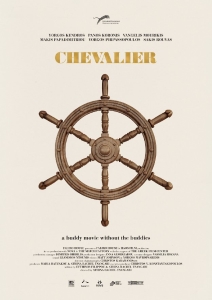 The famous Bechdel Test – taken from a 1985 comic strip by Alison Bechdel – has over the past few years become an ever more popular barometer to gauge the validity of a film’s treatment of women. The new film from Athina Rachel Tsangari, Chevalier (2015) spectacularly fails the test by not actually featuring a single female character on screen, and yet those interested in equality of gender representation in current cinema would be advised not to overlook it. Eschewing the more outlandish elements of 2010’s Attenberg, this is a brilliantly contained and sublimely ridiculous send-up of competitive male egos from a refreshing female perspective. 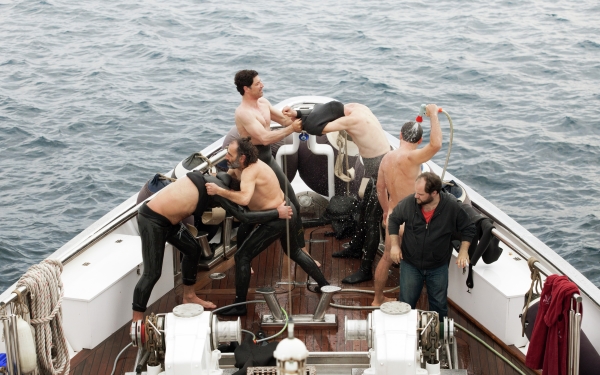 Tsangari chooses to open the film with shots of men emerging from the sea, dashing on the rocks squids and other catches; hunter gatherers for the modern age. But who can catch the biggest fish? And who can do so the fastest? Spear fishing and the yacht cutting through the ocean are playfully phallic scene-setters and no sooner are the respirators out of their mouths than the diving party of six has grown bored and instigated a contest to measure their manhoods, both literally and metaphorically. In fact, the game – which gives the film its title – is to determine which of them, floating across the Aegean Sea in a yacht, is “The Best in General.” Now, everything is judged and awarded points.

These include dress sense, tooth brushing method, window cleaning, singing ability and – naturally – penis size. “I’ve got a beautiful erection, enduring and engorged,” asserts one of the men when he is finally able to show himself off after a little performance anxiety. That is one of the more obvious comedic ploys, though – for most of the film Tsangari and writer Efthymis Filippou keep things tightly restrained, mining enormous amounts of humour from small, ambiguous dialogue exchanges. One of the men will ask how another takes his coffee before allowing for an expertly judged pause and then jotting something in his notebook. The pettiness of one-upmanship is laid bare across the deck of the yacht – upon which an audience favourite IKEA flat-pack construction race takes place once the boat has moored in the Athenian harbour. Of course, the yacht in an of itself represents a symbol of power and masculinity for its owner and Tsangari adroitly manages to navigate her way around the enclosed space to pay equal attention to the individual characters, each with his own quirks and irregularities. Themes of perceived dominance and inane rivalry may point towards wider social allegory – not least with the presence of hired help below decks – but the action is anchored by the combatants and their increasing restlessness for victory. It seems to be more of a universal commentary. With Christos Karamanis’ understated and slightly pallid cinematography, the yacht never becomes too claustrophobic, except perhaps when egos are inflated. But the joy of Chevalier is the fabulous way in which she deflates them to both absurdly comic and cannily insightful effect.