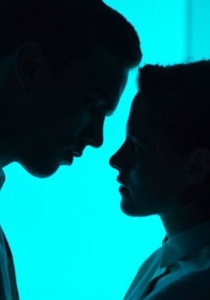 British star Nicholas Hoult hasn’t had much luck with the future this year so far. In Mad Max: Fury Road (2015) he played a mutant road rodent with a suicidal hankering for death via automobile. Nothing could be further from the dusty grunge of George Miller’s vision than Drake Doremus’ antiseptic and soporific Equals (2015), somehow in competition at Venice. Hoult plays Silas, an inhabitant of a post-apocalyptic future that has been reorganised by the so-called ‘Collective’ to eliminate all emotion including – inevitably – love. Every morning he wakes up in an Ikea showroom, dresses in white (or slightly off-white) clothing and goes to work utilising a kind of Oyster card that is stuck in his wrist. 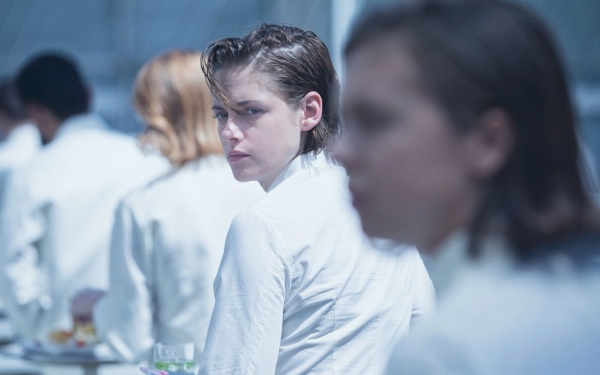 At work, Silas has limited social interaction with his co-workers, consisting of idle gossip about who has got a conception order. Then it’s back to the apartment where he plays an incredibly long version of Jenga – at which point audiences would be forgiven for thinking that Silus’ existence looks like a nice life, especially as no one seems to spill any food and they all have great hair. Like Gary Numan, except no one is called Gary, or Kevin, or Sharon in the future. They’re all called Tobias, or Silas, or Nia. Silas begins to notice Nia (Kristen Stewart) because he has fallen prey to the disease SOS (Switched On Syndrome), which basically means your emotions gradually begin to switch back on.

So far so 1984, Brave New World, THX 1138, Equilibrium, Logan’s Run and/or Gattaca, which is not to say that there mightn’t have been some promise here. After all, Equals scriptwriter Nathan Parker wrote the wonderful Moon (2009). Nia and Silas begin an illicit affair as Nia also has SOS and has been hiding it from everyone. However, the regimental rules that we’ve been led to believe are strictly enforced seem to by conveniently lax. The Collective is the gentlest, most passive-aggressive dystopia you’d ever want to live in. The Healthy and Safety Police seem incredibly inattentive, walk only slightly more quickly than anyone else and, although ‘Coupling’ is supposed to be forbidden, no one seems to notice the pair of star-crossed lovers getting it on every single night in the bathroom, or eventually just to Silas’ place. The initial discovery of touch is nicely done and the two leads both deliver intensely felt performances, discovering sex, tactile sensation and emotion in one painful, shameful rush. Sadly, any true engagement is repeatedly engulfed by the constantly droning techno-ambiance of Dustin O’Halloran and Sascha Ring’s distracting score.

Hope is provided by a covert group of fellow SOS sufferers, led by Guy Pearce and Jackie Weaver, who want to help Nia and Silas escape. Yet their plans are hampered by an imminent cure for SOS that would cancel their love and some Romeo and Juliet-style miscommunication occurs. If one was to take any of Equals remotely seriously, one might wonder at the hidden right-wing stupidity that equates health care provision, collective help, politeness and things that work well within fascism. One might also wonder at the persistence of the idea of an emotionless life – from Spock to the present – when it shows a very basic misunderstanding of what emotion actually is. Most frustratingly, Doremus doesn’t appear to take the world he has created at all seriously. The rules shift and bend, are observed – or aren’t – according to the exigency of the narrative, which ultimately renders the whole exercise fundamentally unconvincing and fatally irksome.