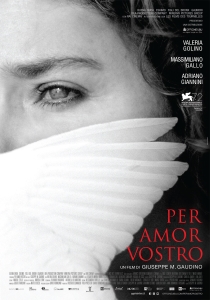 Following a Malickian break between films – his debut Round the Moons Between Earth and Sea was released in 1997 – Giuseppe M. Gaudino tells with For Your Love (2015), the final entry to compete for the Golden Lion at the 72nd Venice Film Festival, a tale of ordinary madness told in an extraordinary but often scattergun way. The woman on the verge of as nervous breakdown is Anna Ruotolo Scaglione, played by Italian actor and director Valeria Golino. A long musical introduction Neapolitan dialect introduces us to Anna as a “capascaqua” or “featherbrain” as the subtitles would have it. However, right from the start Gaudino suggests that Anna is suffering from a quite severe mental illness. 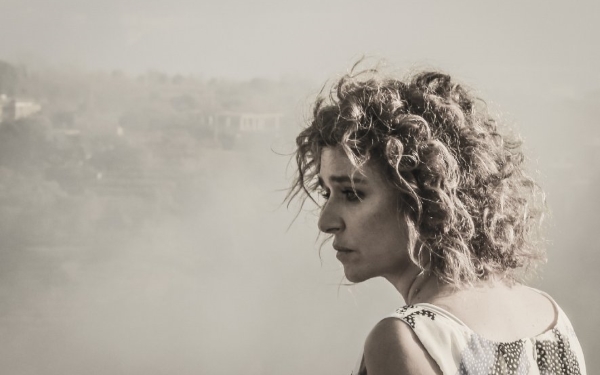 Anna’s general unhappiness is already evident from her face, but as if that wasn’t enough For Your Love is mostly played out in an ill-conceived monochrome palette reminiscent of those adverts for Calvin Klein’s Obsession. Anna sees visions of black clouds rolling cartoonish and apocalyptic way over the bay of Naples, her bus to work is flooded with sea water and her fellow commuters jabber at her incessantly. Although she has finally landed a job as a prompt board holder for what looks like a soap opera, everything else in her life seems to be ganging up against her. All the while, a former colleague and friend Cirio (Salvatore Cantalupo) pesters her about taking his job.

Once a former singer with the stage name ‘Lord’, her abusive loan shark husband Gigi (Massimiliano Gallo) is now a toxic presence in the house, simmering with resentment. Her deaf-mute son Arturo (Edoardo Crò) and her two daughters Santina (Elisabetta Mirra) and Cinzia (Daria D’Isanto) are loving and, in the absence of their father, the family has brief moments of play-acting and joy. Anna is also a devoted daughter, indulging her mother’s distinctly macabre religious manias and as a child was sent to reform school for something her ne’er do well older brother, mentioned prominently in the opening song, had done. This being an Italian film the self-sacrificing woman is seen through a Catholic filament, turning into a stained glass window several times during the film. She does have the possibility of some kind of escape in a budding relationship with lead actor Michele (Adriano Giannini), who seems to be the only person in the film to recognise that this is Valeria Golino here and falls in love with her. Trying to free herself of her husband, hold down a new job and negotiate the dangers of a new affair, Anna’s situation is made constantly more difficult by the camerawork of Matteo Cocco. And here we really need to talk about mental illness.

For Your Love is the second film in competition – after Atom Egoyan’s Remember (2015) – which uses mental illness as a plot device and in so doing twists it every way to suit the respective film. If we are to assume that the visuals are an attempt to accurately portray Anna’s mental state then we would have to diagnose her with a serious psychotic condition. She is obviously clinically depressed and possibly – with the evidence of intense paranoia, and visual and aural hallucinations – schizophrenic, which then begs the question how is she functioning at all? It is possible that this is an over-literal interpretation and the visions are supposed to be taken in the same way Terry Gilliam uses them in 1985’s Brazil, a surreal expression of Anna’s ‘stato di anima’, state of being. In which case, the tricksy sequences, the imagery and visions undermine Golino’s truly brilliant performance which unfortunately keeps getting interrupted so the director can do something stylish and bewildering.