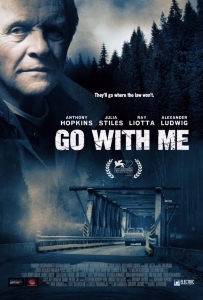 Daniel Alfredson’s appallingly bland backwoods drama Go With Me (2015) stars Anthony Hopkins as ex-logger Lester, who comes to the aid of harassed waitress Lillian (Julia Stiles). While Lester spends his evenings making garden ornaments in memory of his dead wife, Lillian is redecorating her dead mother’s house. Trouble lurks in the hedgerows via stalker Blackway (Ray Liotta), who has already assaulted Lillian outside of her restaurant and decapitated her cat. The sheriff (Dale Wilson) proves worse than useless and suggests she go to find local Whizzer and ask for the help of his friend Scotty. Like a sneaky taxi driver the script takes us around the houses, rather than anywhere we want to go. 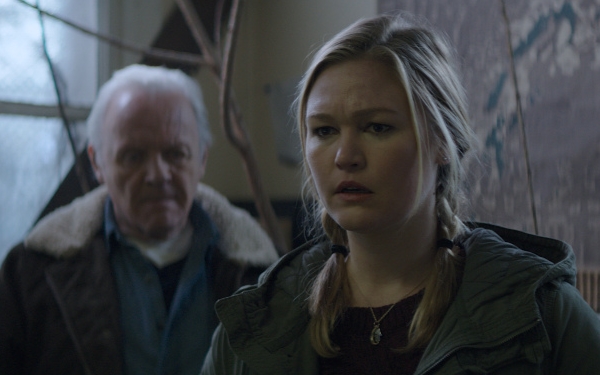 Whizzer (Hal Holbrook) doesn’t know where his pal Scotty (Aaron Pearl) is but Lester, on an apparent whim, decides he will take up the mantle of Lillian’s guardian angel. Not exactly moving with the lightning speed of an avenger, Les takes along Nate (Alexander Ludwig), a gentle stammering giant who can crack skulls for them. Blackway is elusive only for the purposes of extending the running time and it turns out he has his fingers in a lot of crime-based pies. Hillbilly heroin, meth, prostitution, extortion and violence, he is talked about in a way that would build tension if it wasn’t for the fact that we’ve already seen him at the beginning of the film and he appears in flashbacks.

Liotta has played this kind of scumbag in many a film – most effectively in Jonathan Demme’s wonderful Something Wild (1986) – but he feels out of place here. His vileness has a wise-guy urban flavour and yet here he’s supposed to be a local boy who knows the woods. Then again, Hopkins doesn’t even bother with an accent and no one seems to notice he’s obviously Welsh, or that he’s singly unqualified to go and search out an infamous violent psychopath – despite his finely-honed whirligig-making skills. The trio’s quest to find Blackway takes them through a series of clichés – the bar fight, the drug motel etc; they even rescue an old school friend of Lillian’s and put her on a bus out of town. Alfredson gives a convincing feel of upstate Washington but the winding roads soon evoke car sickness rather than tension and the overblown Hermann-esque score by Anders Niska and Klas Wahl promises more than this film could ever deliver. Hopkins mutters through his role with so little conviction that the only reasonable reason he appeared in this nonsense was that he owes Alfredson money from a card game he lost when he was appearing in Kidnapping Freddy Heineken (2014). With a poorly-defined mission and a cast of leads who spend most of the film lost, Go With Me feels like an expensive waste of everyone’s time; as generically uninteresting as its title and a missed opportunity considering the quality of Castle Freeman Jr.’s source novel.