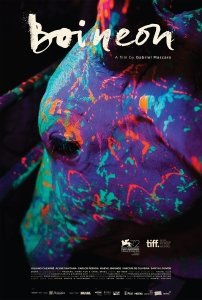 Debuting in the Orizzonti sidebar at this year’s 72nd Venice Film Festival, August Winds (2014) director Gabriel Mascaro’s Neon Bull (2015) tells a bizarre and sensuous story of a team of bull handlers in a remote corner of Brazil. They go from town to town in a large HGV with the bulls which they supply for a strange rodeo event. A bull is released and the horse riders, ride alongside the bulls and try to pull them to the ground by their tails. A film featuring such an exotic and dangerous, albeit decidedly cruel, sport might be expected to focus on the riders who risk their lives as lead characters. However, these guys hardly get more than a line. 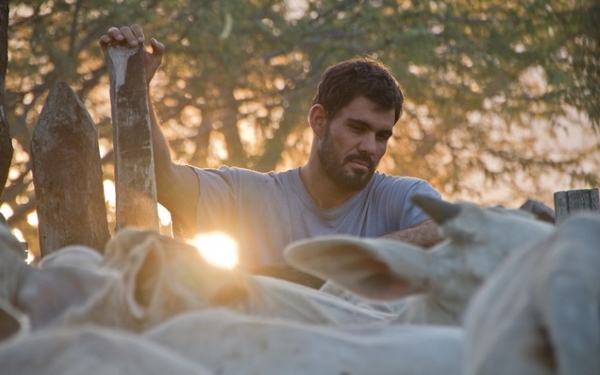 The father is out of the picture and Caca is drawn to Iremar. In a wonderfully simple and touching scene she asks him for a hug and he lovingly reciprocates. An expected romance between Iremar and Galega, who is happy to dance in his costumes, never develops, perhaps they are brother and sister. Mascaro’s screenplay (written with Marcelo Gomes, Cesar Turim and Daniel Bandeira) is elliptical to the point of obtuseness. Jealousy nevertheless rears its head when the fat Ze (Carlos Pessoa) is replaced by Junior (Vinicius de Oliveira), an attractive young man with a glorious mane of hair that he attends to constantly. But nothing is predictable here. The world is captured perfectly and the stink of it steams off the screen with Diego Garcia’s cinematography. There are moments of surreal beauty as when Iremar scavenges in a field full of rags for a mannequin he collects in pieces. This is an earthy film of a wandering group who nevertheless are connected to the soil by their profession and their blithe unawareness of distinctions.

“Caca, it’s clean,” Iremar admonishes the young girl when he tells her to smear dung on a calf’s fresh brand. “It’s just cow shit.” These are people who do lots of different things; have lots of different ideas. Calega might self-administer a Brazilian wax, or be under the truck fixing an oil leak. There are some broad comedy strokes as when Ze and Iremar set out to steal some prize horse semen, but Mascaro treats his subject with the same affection they grudgingly show each other. Late on in the film a romance between Iremar and a heavily-pregnant perfume sales girl notably accelerates when he discovers that she moonlights as a security guard in a dress factory. His delight at seeing the sewing machines up close makes the over-long sex scene that follows seem like an anti-climax. But we must take these bodies as they are; and although the narrative risks becoming arbitrarily episodic towards the end, Neon Bull is a genuine celebration of its characters and their grounded physical life as well as their obstinate ability to dream.