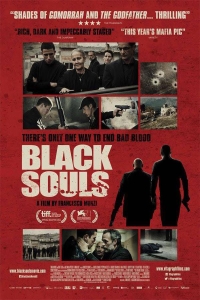 Francesco Munzi’s Black Souls (2014) is a grimly serious family tragedy centred around the feuds within the Calabrian equivalent of the mafia, the ‘Ndrangheta. The drama begins in Amsterdam where a business deal is going down between mob boss Luigi (Marco Leonardi) and some Spanish, or South American partners. It doesn’t really matter which as this proves to be largely an irrelevance to the rest of the film. In fact, the story has a couple of false starts and seems to stumble into being, but this also might be a way of subverting our expectations. 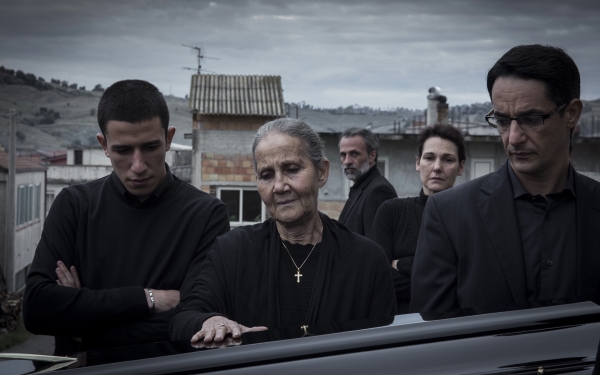 Luigi is one of three brothers whose father was murdered by the local boss back home. He has since become a prosperous drug dealer while his brother, Rocco (Peppino Mazzotta), is the business man of the family, running construction deals and handling bribes. They’re both based in Milan but whereas Luigi holds to his roots, singing songs, stealing goats for a lark and hanging around the strip club, Rocco has married a northerner (Barbora Bobulova) and aspires to respectability, with his suits and spectacles.

The elder brother Luciano (Fabrizio Ferracane) is a white-bearded grump, who still seems to be moping over his dead father. He has refused to go into the criminal activity and instead farms and raises goats. Unfortunately, his son Leo (Giuseppe Fumo) is more like his brothers and after a local bar owner insults the family honour, he shoots up the bar and flees to Milan. Luigi is obviously delighted at the prospect of a young protégé and the scene is set for the schooling of a young gangster, but again this is a lead that is cut short and Luigi heads back to Calabria with Leo and some trusted heavies to sort things out himself. However, things don’t go as planned and the family is threatened with destruction as the old blood feud is driven to a conclusion. The obvious comparison here will be with Matteo Garrone’s Gomorrah (2008), but despite some visual and stylistic similarities Munzi’s film takes the gangster at their own word. Whereas Gomorrah steadfastly refused the glamour that comes with the Omerta and the power struggles and concentrated on the tackiness and wasted lives of the urban wasteland of a poverty-striken Naples, Black Souls takes the gangsters at their word, giving them a tragic glamour and placing them in the Calabrian countryside.

Luigi and his men dress in black and the family scenes, where the women are a largely wordless presence, are shot in a golden glow reminiscent of The Godfather (1972). The family farm is strikingly located in an otherwise abandoned mountainside village and some of Vladan Radovic’s sumptuous visuals nod to Michelangelo Frammartino’s idyllic Le Quattro Volte (2010). And yet, even if Munzi is at times in danger of taking the gangsters at their own estimation, he also seems intent on confounding expectations, most obviously in his remarkably spare use of violence, concentrating on grief and loss rather than the act. The film also boasts a twist that’s so bold and interesting as to make you question almost everything that has come before it. With its surprising narrative twists and handsome visuals, Black Souls ends up being a far more original take on the Italian organised crime drama than first thought.