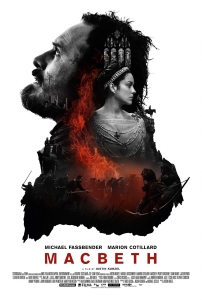 By the pricking of my thumbs, something wicked this way comes – namely Snowtown director Justin Kurzel’s visually inventive take on the Scottish play Macbeth (2015), starring Michael Fassbender as the murderous Thane and Marion Cotillard as his Lady. Scotland is in the grip of civil war and the survival of King Duncan’s (David Thewlis) reign depends on a final battle with the loyal Macbeth commanding his troops. The battle is bloody and brutal but with a stylised 300-like aesthetic of slow motion interlaced with bloody detail. Banquo (the ever excellent Paddy Considine) and Macbeth meet up with the weird sisters – four rather than three here – and are gifted/cursed with their fatal prophecies. 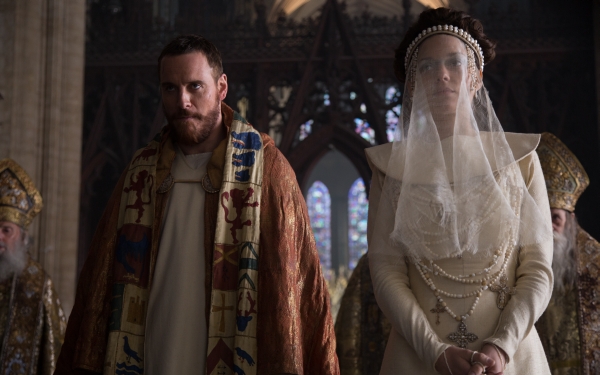 The setting is a grimy, harsh Scotland that feels historically close to the material. The nobles are tent-living tribal leaders and only the king possesses an actual stone castle. Life is lived in the elements with rain dreaming in and the snow freezing the mountains, a harsh landscape similar in tone to the opening of Nicolas Winding Refn’s Valhalla Rising. Jacob Koskoff, Michael Lesslie and Todd Louiso have adapted Shakespeare’s text intelligently and agree or disagree with their various elisions – they lose the Porter for instance – and interpretations, it is good to see the boldness of their decisions. We first see Macbeth and his wife burying their child and that for some might be too on the nose addition to the text, but the movement of Burnham Wood (always a silly part of any production) is accomplished cleverly here.

Fassbender is excellent as the man of violence who as a warrior and a grieving parent is already wrapped in death and whose ambition is glimpsed in his gaunt hungry stare. His soliloquies tend to a monotone mutter, struggling to bring the text to life, or audibility for that matter, but when he interacts with others, crazed during the banquet scene or chillingly psychopathic sending Banquo to his death, he creates a troubled man for whom murder becomes mundane and wading in blood ‘tedious’. Cotillard’s eyes glisten with need and her intimate plotting with Macbeth perversely reveals an affection between these two wounded individuals who are trying to make themselves whole again through the seizure of power and whatever cost. She too will face that cost she so slightingly dismisses, as the consequences of her actions play out in her husband’s murderous reign and her own alienation from the man she loved.

The rest of the cast are admirable but worthy of particular attention is Sean Harris as a watchful Macduff, who is later transformed into a furious avenging force following the murder of his family. Fair is foul and Adam Arkapaw’s camera creates a sternly beautiful atmosphere with the mists, glens and sweeping panoramas, but also forests that cage like trees and the marshes where the weird sisters appear and disappear. The director’s brother Jed Kurzel once more provides a score (as he did for Snowtown and more recently The Babadook) which is heavy on loud pounding – perhaps it is here that we hear the absent porter, knocking on the castle gate. Kurzel initially made his name with a tale of murder in mundane small town Australia and here he has gone to the source. Artfully, his film tracks the tragic decline of a good man gone bad who finds murder too insignificant not to do again and again.